A versatile artist with an affinity for many musical styles, Noa Frenkel is a true contralto with an extensive vocal range. Her concert repertoire reaches from Renaissance to contemporary music.

Most recent opera appearances include world premiere of the complete version of Stockhausen’s Sontag aus Licht at Opera Köln, Pnima by Chaya Czernowin at Opera Stuttgart, Tod eines Bankers by Andreas Kersting in Theater Görlitz, Woman in Zaide/Adama by Mozart/Czernowin at the Salzburg Festival, Frau Ocholowska in world premiere of Johannes Kalitzke’s Die Besessenen at Theater an der Wien, Third lady in Mozart’s Die Zauberflöte at the Opera of Nantes and Angers, Madame Flora in Menotti’s The Medium with Opera Rotterdam, La Maestra delle novizie in Puccini’s Suor Angelica with the Bochumer Symphoniker, Philip Glass’s Akhnaten in Rotterdam, the Madrigal Opera La Barca with the Nationale Reisopera in Holland and Belgium and a new production of Zaide/Adama at Theater Bremen.

Frenkel has appeared with Baroque ensembles such as Les Arts Florissants, Elyma Ensemble, Combattimento Amsterdam, and the Utrecht baroque Consort. She has co-founded the Kassiopeia quintet, a vocal madrigal group that later has recorded all 6 madrigal books of Carlo Gesualdo. The CD´s have been highly praised by the international music press.

She is an admired interpreter of contemporary music, and is performing regularly in the main festivals in Europe with renowned ensembles such as Ensemble Modern-Frankfurt, The Schönberg Ensemble–Amsterdam, Klangforum Wien, L’Ensemble Intercontemporain-Paris, MusikFabrik – Cologne, The Israeli Contemporary Players, as well as the Experimental Studio Freiburg (SWR).
Until recently she was the soloist of the Dutch Maarten Altena Ensemble – a group dedicated to both improvised and written contemporary music, with whom she regularly performed and toured Europe, Japan, as well as North America and has recorded several CD´s. She has recently performed Morton Feldman’s 3 Voices in Madrid, and led a performance of John Cage’s Songbooks with Israeli ensemble Musica Nova. Many composers have composed works specifically for her voice.

Ever in search of new ways to perform, Frenkel has created the solo performance “Solitude in the Age of Mass Media” – combining newly composed music with pieces by Mahler and Purcell in a multimedia performance, appearing in Tel Aviv and Madrid. Future performances will take place in The Netherlands in 2016.

Amongst her latest CD’s are Artur Schnabel, Notturno, the Te Deum by Portuguese baroque composer Almeida. and Berio’s Folk Songs. She has previous recording with labels Deutche Gramophone, Neos, Col Legno, and Globe/Codaex. 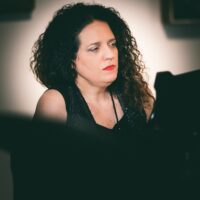