Noa Mick is currently living in Basel studying for her master’s degree in saxophone performance at the Basel Music Academy with one of today’s leading contemporary music, Marcus Weiss. She obtained her bachelor’s degree in June 2016 from the Pole Supérieur program at the Sorbonne University and the Boulogne-Billancourt conservatory studying with saxophonist, Jean Michel Goury.

Noa was the student of the Israeli philharmonic orchestra’s saxophone player Gan Lev and after her military service as soloist in the IDF orchestra, she moved to study in Paris. After graduating from Paris, she moved to Basel in order to expand her knowledge in saxophone and in contemporary chamber music.

While studying abroad, she developed her skills in the field of classical and contemporary music in solo repertoire, chamber music and orchestral music.
Noa received AICF scholarships four times, two of those were “excellence” scholarships, three scholarships were given for her solo playing and one with her quartet “Fortissimo”.

Noa performs many solo recitals in which she combines chamber music as well. The programs for these recitals are constructed around different themes in order to make them accessible to the audience. These recitals were played, during the last three years, around France, mainly in Paris as well as in Israel.

In the chamber music field, she founded the saxophone quartet Au Bout du Monde (At the end of the world) that performs regularly in Paris, Belgium and Switzerland and was very respectfully recognized at the last World Saxophone Congress “SaxOpen” in July 2015 in Strasbourg, France.

She also participated during the last 4 years as a soloist and a member of the “Jean-Michel Goury and Friends” saxophone ensemble with which she plays in tours around France and in Paris. She gained recognition for her performance with the ensemble playing world premiered pieces composed by A Louvier and J Malaussena at the same congress.
Noa performs with the Nishi Duo (piano & saxophone) around France, recently in Impromptu Music Opus 1 festival in Chambon-sur-Lignon, in Israel and is currently planning a tour in the USA as well as concerts in France. She hosts in this ensemble different instrument players (cello, saxophone etc.) in order to create a variety of interesting chamber music formations.

This summer Noa had the great honor to be invited to the Tzlil Meudcan festival in Tel-Aviv to premier a piece by Reuben Sarusi with the Tel-Aviv Saxophone Quartet.
She was also invited to teach and guide the sectionals for the Israeli National Youth Orchestra.

As an integral part of her work, Noa recognizes the importance and pleasure of working with composers on their pieces that she plays, this being one of the greatest advantages of working on contemporary music. During the last year Noa has met François Rossé, Betsy Jolas, Alain Louvier, Julien Malaussena, Grégoire Lorieux and had a wonderful working session with Paul Mefano in order to record his piece Periple.
Along her activity, Noa continues to study in different schools such as the student exchange program she took part of between September 2015-January 2016. She moved to Switzerland to study with saxophonist Pierre-Stephane Meuge at the Haute Ecole de Musique in Lausanne.

Noa has competed in several competitions around Europe (Italy, France) as well as the 5th International Jean-Marie Londeix saxophone competition in Bangkok, Thailand in July 2014.
In June 2015 she won the first prize at the Sorbonne Young Soloists competition for her solo and Nishi Duo performance. The jury included Vincent Barthe and Paul Mefano. Her prize was a recital at the Sorbonne Richelieu Amphitheater, Redecorer la Chambre, which took place in April 2016.

Noa’s goal is to continue performing, collaborating in chamber music ensembles and develop today’s contemporary repertoire for saxophone. She inspires to be able to make this music accessible to the audience. 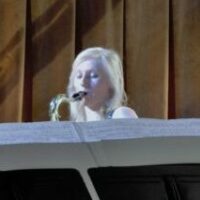