Drummer, percussionist, composer & educator, established himself as a major multidisciplinary musician In the Israeli music scene.
Since his early years Noam was fascinated with grooves, driving force later on drew him to explore many different cultures, countries and genres.
Defines himself as a multicultural musician. His quest began in early age with, Funk, Fusion & Jazz, while his exploration grew deeper in the Jazz tradition, he was fascinated by the Cuban & Brazilian music world, instruments & culture. His senior year in Wizo high school of arts began the path to Arab music; Turkish, Persian, Lebanon, Egyptian, Moroccan…
By then he would discover different Hand drums, Frame drums & various percussions from all over the world. Each new peace of music, sound, instrument led him to different part of the globe, only to realize the sheer great magnitude of music, the human spirit & the innovation it carry with.
“World music” suddenly made sense.

At that time Noam began his acquaintance with the free improvise music world through the saxophonist & composer Albert Beger, a relationship later on would bring the two working together professionally.

Graduating with honor Wizo high school, Noam joined the army. He served for 3 years, first in tank division, later on as a combat medic & finally as a commander. After discharge, attended Jerusalem academy of music there he received excellence scholarship.He granted as well, a full scholarship from the “American-Israel Cultural Foundation”. His fascination with electronic music & grooves, a fertile ground for a few experimental bands, eventually will lead to NSD Trio.
Noam Graduated with honor his bachelor degree & continued to his master`s. 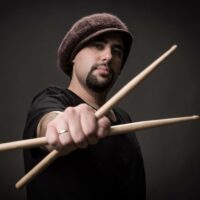