Born in Haifa, in 1955, Israel, Ofer Ben-Amots gave his first piano concert at age nine and at age sixteen was awarded first prize in the Chet Piano Competition. Later, following composition and piano studies at Tel Aviv University, he studied at the Conservatoire de Musique in Geneva, Switzerland and the Music Academy Detmold in Germany. Upon his arrival in the United States in 1987, Ben-Amots studied with George Crumb at the University of Pennsylvania where he received his Ph.D. in music composition. Currently Chair of the Music Department at Colorado College, Dr. Ben-Amots teaches composition, music theory, and a wide variety of liberal arts subjects.

Ofer Ben-Amots is the winner of the 1994 Vienna International Competition for Composers. His chamber opera, Fool’s Paradise, was premiered in Vienna during the 1994 festival Wien modern and has become subsequently part of the 1994/95 season of Opernhaus Zürich. He is recipient of the 1988 Kavannagh Prize for his Fanfare for Orchestra and the Gold Award at South Africa’s 1993 Roodepoort International Competition for Choral Composition. His Avis Urbanusfor amplified flute was awarded First Prize at the 1991 Kobe International Competition for Flute Composition in Japan. In 1999, Ben-Amots was awarded the Aaron Copland Award and the Music Composition Artist Fellowship by the Colorado Council on the Arts. In 2004 he won the Festiladino, an international contest for Judeo-Spanish songs, a part of the Israel Festival in Jerusalem. In 2015, Ben-Amots won the First Prize at the 4th Smareglia International Composers Competition in Udine, Italy. His innovative multimedia opera, The Dybbuk, has been produced in over ten different productions in the US, Germany, and Israel. The opera has been described as “a uniquely beautiful and powerful new work”and its production as “a service to music and to what is best in our humanity”(Listen for Life Reviews, by Donna Stoering, September 30, 2016.)

Ofer Ben-Amots’ works have been repeatedly recognized for their emotional and highly personal expression. The interweaving of folk elements with contemporary textures, along with his unique imaginative orchestration, creates the haunting dynamic tension that permeates and defines Ben-Amots’ musical language. His music has been published by Baerenreiter, Kallisti Music Press, Muramatsu Inc., Dorn, and The Composer’s Own Press. It can be heard on Naxos, Vantage, Plæne, Stylton, and the Milken Archive of Jewish Music. 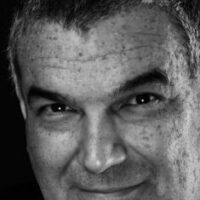