Bassist Omer Avital was born in the small Israeli town of Givataim where his formal training began at age 11 when he entered the Givataim Conservatory to study classical guitar. He grew up in Tel Aviv, in a Moroccan-Yemenite family, where evidence of his Middle Eastern and Spanish influences came together with jazz and blues. While enrolled at the Talma Yalin, Israel’s leading arts high school, he switched his focus to the acoustic bass, was the leader of the jazz ensemble, and wrote all the arrangements. By his senior year at age 17, he was playing professionally, but then spent less then a year in the Israeli Army. After discharge, Avital moved to New York City playing with Roy Haynes, Jimmy Cobb, Nat Adderley, Walter Bishop, Jr., Al Foster, Kenny Garrett, Steve Grossman, Jimmy Lovelace, and Rashied Ali.

But his big break came in 1994, not playing with giants, but leading his own groups and big band during the after-hours sessions at Small’s in Greenwich Village, along with pianist and co-collaborator Jason Lindner. Some of their sidemen included Mark Turner, Myron Walden, Gregory Tardy, Joel Frahm, Charles Owens, Grant Stewart, Jay Collins, Jimmy Green, Ali Jackson, Joe Strasser, and Daniel Freedman. In 1997, the Impulse label released Jazz Underground: Live at Smalls, featuring Avital’s quartet. He signed to record his debut album Devil Head the following year, but it was never issued. 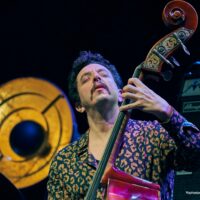