Born 1986 in Jerusalem, Omri Abram completed his double Bachelor’s degree at the Jerusalem Academy of Music and Dance under the tutelage of Tzvi Avni, Ayal Adler and Amnon Wolman in composition, and Allan Sternfeld and Eitan Globerson in piano. He has recently finished his Master’s degree in composition, with distinction, at the Music Academy of Basel, Switzerland, under the tuition of Erik Oña, and is finishing a specialized Master’s in composition at the Basel music academy and a Master’s degree in musicology at the Hebrew University of Jerusalem.

He is a graduate of Meitar Ensemble’s “Tedarim” internship program for outstanding young musicians in contemporary music; has received grants from the America-Israel Cultural Foundation for the years 2010-2016; and is a recipient of the Siday Fellowship for Musical Creativity for the years 2015-2017.

His music has been performed on many stages in Israel, Switzerland, Italy, Holland, Germany, Austria, Hungary and the USA by ensembles such as Meitar, Ensemble Phoenix Basel, the East Coast Contemporary Ensemble in New York, Ensemble Proton Bern, the Tel Aviv Wind Quintet, Duo Northeast, Ensemble Lemniscate and others. Festivals and concert series in which Abram’s works have been performed include Impuls, Archipel, Zeitraüme Basel, Jerusalem International Chamber Music, CEME, Composit, Tzlil Meudcan, Nachtstrom and Attacca. He has participated in various international masterclasses, where he has benefited from the knowledge and artistry of composers Chaya Czernowin, Salvatore Sciarrino, Rebecca Saunders, Pierluigi Billone, Peter Eötvös, Beat Furrer, Georges Aphergis and Fabian Panisello, amongst others. 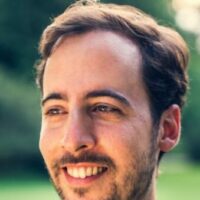