Or KosKas has two loves, Jerusalem and Paris, two cities of light. In the one he draws aspirations for peace, in the other the melodious sounds of Molièrre’s language.

Born in Jerusalem to French parents, he grew up to the sounds of classical music, a paternal great passion, and various common English, American, French pop and of course Israeli songs. “At home, music was always in the air. I knew by heart the Beatles, Cat Stevens and I got inspired listening to Pink Floyd. My greatest inspiration was Michael Jackson, which in my opinion was a musical genius – the Mozart of modern times.” However Or felt more of being himself with French songs; he listened to Goldman, Berger, Cabrel, Dion and Sanson or Aznavour and Piaf …

Today Or is a musician and singer-songwriter. As guitarist and pianist, he surrounds himself with the best musicians.

“Music is my life! I do not exaggerate in saying that it is the food of the soul or the language of the Gods … As far as I can remember, it has been more than essential to me. ”

KosKas started his musical studies, still as a child, in a conservatory of music – the Academy of Music in Jerusalem. His main education is in classical guitar and he won his first competition at the age of twelve interpreting Bach and Villa-Lobos.

In 2008, his destiny crosses that of the musician Nate Shavin. A project from their friendship and their talent takes shape: they wrote out a French album including music influence from baroque to modern electronic sounds. KosKas writes, composes his own songs and at the same time interprets the results of Shavin`s work. Their first three songs are born: “Pourquoi Pas ?” a remarkable message of peace; their Franco-British duo “Attention au Coeur”, a rap that warns against the crazy rhythm of our society; and finally “L’élixir”, singing for an escape to a better world.

Following this unique cooperation, KosKas writes “Les Images” with his saxophonist Benny and “Caprices de la nature”. He has just completed the love song “Nuit des Temps” and in that talks about his great love, so beautiful, but that – in his own words – “belongs to the past”. He would say no more, only his troubled smile betrays his emotion.

These hits were broadcasted on various French and Israeli channels. In addition to his private and public recitals, KosKas participated to the Radio FM88 Festival . In front of thousands of people he performed at Palais Des Congres of Paris in December of 2013 and, during the next tour that took place in March of 2014, he did the support act for Idan Raichel’s project at “La Cigale” also in Paris.

The last few months have been more than productive for Or, who among the rest managed to also release his first personal album with the title ”Trois mots tout bas “. The album contains eight songs (both in Hebrew and French) and he is already working on the rest of the songs that will complete this work.

“Scene is a source of energy for me. I need to give that to the public, a taste of what I feel. As a child, during my concerts I felt this fabulous emotion that unites an artist to his audience- this is simply what I think of when saying the word happiness. “ 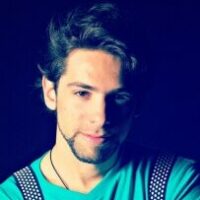