Receiver of the 2014 “Diploma d’Onore” from the Accademia Chigiana in Siena, Italy, Ori Wissner-Levy is one of Israel’s most promising young violinists. Born in New York in 1990, he started playing the violin at age 5. He attended the Manhattan School of Music, where he studied with Patinka Kopec, Ludmila Feldman of the Buchmann Mehta Academy of Music, with Kolja Blacher at the HFM Hanns Eisler, and currently with Mihaela Martin at the Barenboim Said Academy. Ori has performed as a soloist with the Buchmann Mehta Symphony Orchestra, the Israel Symphony Orchestra, the Israel Netanya Kibbutz Orchestra, Orquesta Sinfonica Nacional de Colombia and the Orchestra di Padova e del Veneto. He has been a recipient of the America-Israel Cultural Foundation awards since 1999. In 2012, Ori performed as a soloist alongside Julian Rachlin in Mozart’s Sinfonia Concertante. Ori won first prizes in the Lions-Israel Violin Competition, the BMSM Chamber Music Competition, the UNO Competition, Paul Ben-Haim Competition and just recently the Clairmont Competition. This past year, he performed the Mendelssohn Concerto on tour in China, and gave solo recitals in Italy. Ori has appeared in the Salzburg, Schleswig Holstein, Kfar Blum, Gotland, Schirmonnikoog and Jerusalem chamber music festivals. Ori is an aluminus of the Keshet Eilon Violin Mastercourse. Ori performs on a Jean Baptiste Vuillaume violin, generously loaned to him by Mr. Yehuda Zisapel 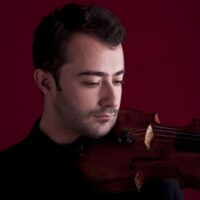