Ran is a NYC based actor. Growing up both in Israel and the states he is fluent in both English and Hebrew. His work extends to Screen and theater. Staring in promos for TV series: The Lift (with Al Roker) and LaLa’s Full Court Life (with La La Anthony). Ran has worked on commercials for top brands such as: Spectrum, Con Ed, Optimum, Con Ed, Jersey Mike’s subs, Wyndham Hotels, NJR Home Services, Infor, Manhattan Hotel Group, JP Morgan Chase, Blade, the medicine company, Yotel, The Company Store, Flyp, DaveK, United Stations and more. He has worked on TV series airing on: Telemundo, VH1, TrueTV, Travel Channel, ID, Comedy Central, Adult Swim and FYI. Ran had the honor of performing in distinguished venues among them: New York Theater Workshops, the Theater at St. Clements, The Jewish Museum, The Gallery Players, The Lee Strasberg Theater, The Marilyn Monroe Theater, Manhattan Rep. Theater. Ran has been the subject of several in-depth interviews in numerous newspapers and magazines in the US and around the world (among them front-page profile in The Jewish Week and a spotlight feature in Backstage magazine). Ran has also served three years in the Israeli Air Force and done volunteer work at a suicide call center, psychiatric facility and with terror victims.

Ran is a NYC based actor. Graduated from The Lee Strasberg Institute. His work extends to screen and theater. Ran also works as a communication skills educator in the medical filled and writes a weekly column. www.ranlevy.weebly.com 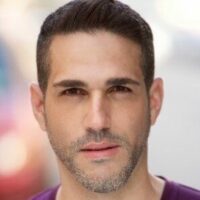