Ravid Freedman (Born 1994, Herzliya) is an interdisciplinary artist living and working in Tel Aviv. She works principally in sculpture, video-art, and video-mapping which assemble site-specific installations. Ravid develops her practice through a unique research of the notion of the element: the element forges a double-becoming between language and images, opening up a world with its own rationality. Thus, Ravid creates a maximal space of possibility for exchange, chance and difference: word to material, matter to possession, mascot to totem, verb to sculpture, root to image, element to parallel reality.

Spinoza’s famous dictum, “we do not know what a body is capable of”, is materially and conceptually explored in Ravid’s work, through her research of the elements which constitute her fabricated mythologies. Ravid explores questions and aspects of limbo, physicality, religion, acceleration and denialism, kitsch and orientation in an uncanny space characterised by speculative realism. 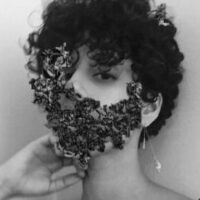