Roee Rosen (b. 1963) is an Israeli-American artist, filmmaker and writer.

Rosen is a professor at Ha'Midrasha Art College, and at the Bezalel Art Academy, both in Israel.

Rosen’s painting and text installation, Live and Die as Eva Braun (1995-1997), stirred a scandal when first exhibited at the Israel Museum. It was later recognized as groundbreaking in its approach to the representation of the holocaust and was exhibited in Berlin, New York, London, Warsaw, and, in 2017, in Athens as part of Documenta 14.
Rosen dedicated years to his fictive feminine persona, the Jewish-Belgian Surrealist painter and pornographer Justine Frank, a project that entailed fabricating her entire oeuvre as well as a book and a short film, Two Women and a Man (2005). The film won a special mention on its premiere at the Oberhausen short film festival, The book, Justine Frank, Sweet Sweat (Sternberg Press) was listed as one of the best books of 2009 by Artforum magazine.

In Rosen's cinematic cycle The Confessions of Roee Rosen (2008), the artist's supposed confessions are delivered in Hebrew by three surrogates: illegal female foreign workers who do not understand the language. Confessions premiered at the FIDMarseille festival, where it won a special mention, and was later shown worldwide, among other places at Manifesta 7, in Italy.

Rosen's more recent fictive character is Russian poet and artist Maxim Komar-Myshkin, with whom the principle of fictionalizing one's identity extends to include a collective he founded, The Buried Alive Group. The manifesto and videos supposedly produced by the group were assembled as a film, The Buried Alive Videos premiered at the Rome Film Festival, 2013, where it was awarded a special mention. The film also won the best film award at the Bucharest International Experimental Film Festival, 2014. At the heart of the projects is the book Maxim Komar-Myshkin, Vladimir's Night (Sternberg Press in 2014) in which the Russian president is tortured and assassinated by animated objects.

Rosen’s film The Dust Channel (2017) was coproduced by Documenta 14, where it was exhibited along with two historical text and image installations: The Blind Merchant and Live and Die as Eva Braun.
Several major programs were dedicated to Rosen's cinematic production, amongst them profiles at the Tate Modern, London (2010), the Museum of Modern Art, Vienna (2014), the Oberhausen International short film festival (2012), and comprehensive retrospectives at La Roche-sur-yon film festival (2013), and FICUNAM Festival, Mexico City (2018).
One person mid-career survey exhibitions of the artist were held in the Rotyal Castle (Zamek), in Warsaw (2010), Tel Aviv Museum (2016), the Edith Russ House for Media Art, Oldenburg (2016), Charlottenborg, Copenhagen (2019) The Project Arts Centre, Dublin (2019), among others.
In 2018 an expansive one person exhibition was held at Centre Pompidou, Paris, entitled Histoires Dans Le Pénombre. The exhibition included an installation of the Blind Merchant, which was subsequently added in its entirety to its permanent collection.

Rosen is currently working on a feature-length film entitled Kafka For Kids. The latest short film he released, Explaining the Law to Kwame (premiere: FIDMarseille; FNAC and Flash awards, 2020), is a part of that project. 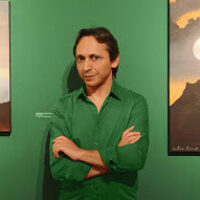