Pianist Roni Levy, based in Berlin, is studying since 2018 at the Hochschule für Musik Hanns Eisler in the class of Prof. Eldar Nebolsin.
She has performed in various concert halls in Israel, including the main venue of the Israel Philharmonic (the Charles Bronfman Auditorium) and the Recanati Auditorium at the Tel-Aviv Museum of Art, and abroad in Germany, Italy and the US.

Roni Levy began her piano studies at the age of 7 with Mrs. Natalya Blumenfeld at the Israeli Conservatory of Music Tel Aviv, where she studied for 11 years.
Later she continued her studies at the Buchman-Mehta School of Music at the Tel-Aviv University in the class of Prof. Emanuel Krasovsky, until she moved to Berlin in 2018.

In her first year of studies at the Buchman-Mehta School of Music Roni has won the school's concerto competition and performed as a soloist with the Buchman-Mehta Symphony Orchestra conducted by Maestro Yoav Talmi.
Roni has won also the first prize in the Israel Conservatory Competition and the third prize in the Katcz Competition, and was a finalist at the Aviv Competition and at the International Competition of the Società Umanitaria, Milan, Italy.
Since 2010 she has been supported by the America-Israel Cultural Foundation scholarships. Roni is also a recipient of the STIBET graduation grant on behalf of DAAD.

Roni served as an outstanding musician in the IDF. 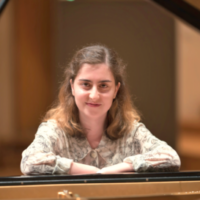