Ronnie Reshef’s music has been described by the press as “Witty, lyrical art-song settings” (Broadway World), “Vivid, elegant… …smart, and gorgeous” (Houston Chronicle), “…Wonderfully beautiful music…” (Haaretz). Reshef’s work spans from opera and concert music, all the way to Off-Broadway musicals, concentrating on works for the theater. Her first opera Requiem for the Living was performed in New York city, Kentucky, and Texas, where it was a finalist in Opera Vista competition. Her musical Conspiracy! had an Off-Broadway run at MITF (NYC), where it was nominated for best music and lyrics, among four other nominations. Her opera Something to Live For participated at Fort Worth Opera’s (TX) Frontiers showcase, was awarded the Main-Stage Prize by Boston Metro Opera (MA), and was a finalist in The American Prize.

Recent highlights include When He Was Good (2019), a new chamber opera commissioned and premiered by IMVAJ Masterclasses Jerusalem, and Childhood Sketches (2019), commissioned and premiered by the Thelma-Yellin wind band; 2021-2022 includes a commission from The Israeli Opera, a premiere for ‘Night Moments’ by Air & String Duo, and a performance of ‘Childhood Sketches’ by the TAU Wind Band. Reshef’s works were commissioned and performed by groups such as the Israeli Chamber Project, Hartford Opera Theater, Atlanta Opera, The Secret Opera, The Qube Quartet, Thompson Street Opera, and the Israeli Philharmonic Orchestra, throughout the US and Israel, in venues such as Le Poisson Rouge, Jazz in Lincoln Center, The Tank, Teneri Institute, HaTeiva, and the Israel International Festival.

In addition to her concert music career, Reshef works extensively with theater and film scoring. She regularly works at the distinguished Gesher Theater, and has worked at Habima (the Israeli National Theater), Haifa Theater, HaKameri, Tmuna Theater, and others. Film and TV work include the recent documentary series Mushlamim (Perfect) for the Israeli documentary channel HOT-8. 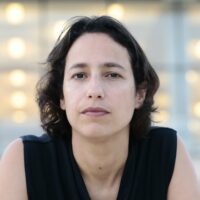