Ronny Carny was born in Hadera, Israel, 1980. After her military service, she worked as a costume and set designer for two years, before entering Bezalel Academy of Arts and Design in Jerusalem for her Bachelor of Fine Art.

In 2005 she travelled to Vienne, Austria, as a foreign exchange student in the Akademie der bildenden Kunste, Wien. Carny finished her BFA studies in 2006, receiving an excellence award from the Bezalel Academy of Arts and Design.

In the following years, Carny participated in many group exhibitions and a solo exhibition in Darom, an independent art space in Tel- Aviv.
In 2009, Carny began her Master of Fine Arts studies at Bezalel Academy of Arts and Design, which she finished with the highest honors in 2011. In the following years, she continued to participate in group shows in various galleries, and art spaces. She had a solo exhibition at the Ramat Gan Museum of Israeli Art in 2014.

In 2013 she spent three months at the Cite International Des Arts, Paris. Starting in 2014, she’s been working at Gabirol, an artists complex in Tel- Aviv. There she also initiated and curated a large-scale group exhibition of installations by twelve artists at the Gabirol gallery space. Carny is an art teacher and a lecturer in institutions including the Bezalel religious extension in Jerusalem, and Arison School of the Arts in Tel- Aviv. Carny is also the head of one of Bezalel’s preparatory programs for the arts.

During 2017 Carny was a resident artist in Dusseldorf, Germany, for six months. The scholarship was on behalf of Cary & Dan Bronner Foundation, Germany; Kunststiftung NRW, Germany; Goethe-Institut, Tel Aviv. 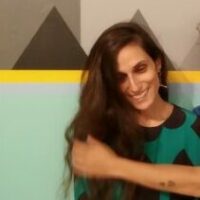