Pianist Shai Wosner has attracted international recognition for his exceptional artistry, musical integrity, and creative insight. His performances of a broad range of repertoire—from Beethoven and Schubert to Ligeti and the music of today—reflect a degree of virtuosity and intellectual curiosity that has made him a favorite among audiences and critics, who note his “keen musical mind and deep musical soul” (NPR’s All Things Considered).

Committed to innovative programming, his latest project is Variations on a Theme of FDR, a suite of five variations by five composers: Derek Bermel, Anthony Cheung, John Harbison, Vijay Iyer, and Wang Lu—who were given as their ‘theme’ a quote from a 1938 speech by President Franklin Delano Roosevelt: “Remember, remember always, that all of us… are descended from immigrants and revolutionists.” Each variation is inspired by the story of a particular immigrant chosen by each composer. Mr. Wosner’s idea of collecting variations on a shared theme from a variety of composers was inspired by the similar initiative undertaken two centuries ago by music publisher Anton Diabelli—an effort that led to the composition of Beethoven’s Diabelli Variations, with which Variations on a Theme of FDR is paired in recital. The project was commissioned by Peoples’ Symphony Concerts in New York City, where Wosner is the 2020-2024 Artist-in-residence, as well as the Philadelphia Chamber Music Society. Other performances on tour include The Wallis in Beverly Hills and the Vienna Konzerthaus.

Another current project is “Signs, Games & Messages,” a festival devoted to the unusual juxtaposition of works for various combinations of instruments inspired by the musical explorations of the Hungarian composer György Kurtág. The festival launches in spring 2022, at Bard College-Conservatory of Music, where he is on faculty, with guest artists including the JACK Quartet as well as veteran violinist Arnold Steinhardt featured as a storyteller in a program that is based on Kurtág’s seminal, hour-long work Kafka-Fragments.

Additional highlights of Mr. Wosner’s 2021–22 season include Beethoven’s Piano Concerto No. 1 with the St. Louis Symphony Orchestra; Beethoven’s “Emperor” Concerto with the Jerusalem Symphony and at the Metropolitan Museum of Art with The Orchestra Now; a week-long residency at the San Francisco Conservatory of Music, culminating in chamber performances of works by Brahms and Fauré; performances with the Chamber Music Society of Lincoln Center where he has been a regular artist since 2002; concertos by J.S. Bach and Brett Dean on tour with ECCO (East Coast Chamber Orchestra) with whom he has a longstanding relationship; Mozart’s Piano Concerto No. 15 in B-flat major, K. 450, with the Princeton Symphony; Brahms’s Piano Concerto No. 1 with the Albany Symphony; and performances around the U.S. and China with violinist Pinchas Zukerman and cellist Amanda Forsyth.

Mr. Wosner records for Onyx Classics, and his most recent album, a selection of Schubert piano sonatas released in March 2020, continued his career-long, critically acclaimed engagement with the composer’s music. This double album completes Mr. Wosner’s recorded series of the composer’s last six sonatas, which he has also performed as a recital series in New York at the 92nd Street Y; in Washington, DC at The Phillips Collection; at Duke University in Durham, NC; and at the Konzerthaus Berlin. Additional recordings include Impromptu, comprising improvisationally inspired works by composers from Beethoven and Schubert to Gershwin and Ives; concertos and capriccios by Haydn and Ligeti with the Danish National Symphony conducted by Nicholas Collon; an all-Schubert solo album featuring a selection of the composer’s folk-inspired piano works; solo works by Brahms and Schoenberg; and works by Schubert paired with new works by Missy Mazzoli. As a chamber musician, Mr. Wosner has recorded Beethoven’s complete sonatas and variations for cello and piano with Ralph Kirshbaum and—for Cedille Records—works by Bartók, Janáček, and Kurtág with his duo partner of many years, violinist Jennifer Koh.

Mr. Wosner is a recipient of Lincoln Center’s Martin E. Segal Award, an Avery Fisher Career Grant, and a Borletti-Buitoni Trust Award—a prize he used to commission Michael Hersch’s concerto Along the Ravines, which he performed with the Seattle Symphony and Deutsche Radio Philharmonie in its world and European premieres. He was in residence with the BBC as a New Generation Artist, during which he appeared frequently with the BBC orchestras, including conducting Mozart concertos from the keyboard with the BBC Scottish Symphony Orchestra. He returned to the BBC Scottish Symphony in both subscription concerts and Proms performances with Donald Runnicles and appeared with the BBC Philharmonic in a live broadcast from Manchester's Bridgewater Hall. As a concerto soloist in North America, Mr. Wosner has appeared with the major orchestras of Atlanta, Baltimore, Berkeley, Chicago, Cleveland, Dallas, Indianapolis, Los Angeles, Milwaukee, Philadelphia, Pittsburgh, Ottawa, San Francisco, and Toronto, among others. In addition to the BBC orchestras, he has performed abroad with the Aurora Orchestra, Barcelona Symphony, Bournemouth Symphony, Frankfurt Radio Symphony, Gothenburg Symphony, LSO St. Luke’s, Nieuw Sinfonietta Amsterdam, Orchestre National de Belgique, Staatskapelle Berlin, and the Vienna Philharmonic, among others. Mr. Wosner has also appeared with the Orpheus, St. Paul, and Los Angeles Chamber Orchestras, having conducted the latter from the keyboard in a 2010 concert that was broadcast on American Public Radio. Recently, he toured with ECCO to Memphis, Philadelphia, and New York for the world-premiere performances of Christopher Cerrone’s piano concerto The Air Suspended.

Born in Israel, Mr. Wosner enjoyed a broad musical education from a very early age, studying piano with Opher Brayer and Emanuel Krasovsky, as well as composition, theory, and improvisation with André Hajdu. He later studied at The Juilliard School with Emanuel Ax. He resides in New York with his wife and two children. 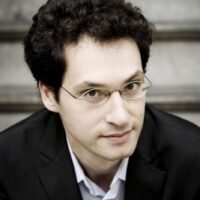