Jazz guitairst Sharón Gleack has been involved with music since early childhood. Born in Ramat Gan, Israel, he played the keyboards since the age of five, and then took over the guitar at twelve.

Sharón composes modern jazz music, which relies on his inventive harmonic approach, and yet manages to blend with classical jazz. His palette of colors is varied, taking elements not just from jazz, but also from western classical music, rock, blues and hip hop, resulting constant change in his pursuit for new sounds and harmony.

His most recent project includes music for jazz quartet, which is available in his website for listening. In Boston he was a part of the house band in the legendary Wally’s jazz club, and In Israel he had led a jazz guitar trio that played and performed for several years, including the White Night festival, Givaataím Theater, Idea Bar, Elite and Shaqued Café.

Sharón lives in Brooklyn, New York, where he plays in different venues, such as 68 Jay st. Bar, The Tea Lounge and The Neighborhood, to name a few. He also teaches music at Joe’s Music Academy, and gives private lessons around the city. 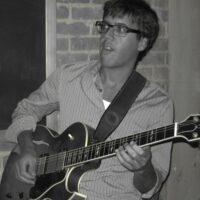