Splitting her time since childhood between Israel and New York City, Sharona Eliassaf is deeply affected by the changeable notion of place: Her canvases are stage-like spaces where she manipulates her own sublime, weaving cryptic narratives from the collected experiences of overlapping countries, languages, identities, markets, anxieties, and technologies experienced in the everyday. Like in a dream, nothing is excluded as subject matter: TV game shows, storefront signs, breaking news, overheard conversations, cosmic phenomena, and digital images all swirl and synthesize in a single composition

Sharona Eliassaf (B. 1980) is an American and Israeli painter who lives and works both in New York and Telaviv. She received her BFA from the Bezalel Academy of art and design, Jerusalem in 2004 , her MFA from the School of Visual Arts, New York in 2011 and attended the Skowhegan School of Painting and Sculpture, Maine in 2011.

Recently she has exhibited her work in a solo exhibition at Hezi Cohen Gallery in Telaviv and has been included in numerous group exhibitions and publications . Her work had been shown in the Queens Museum of Art, New York, Braverman Gallery, E.tay Gallery, Trestle Projects, September Gallery, Transmitter Gallery and Beverly’s among others. In 2018 Eliassaf will be participating in an exhibition at the Crystal Bridges Museum of American Art, Arkansas which will bring together Georgia O’Keeffe’s works, alongside works by a selected group of contemporary artists that expand on O’Keeffe’s artistic legacy. 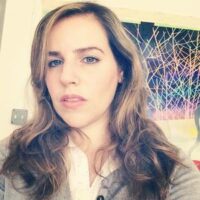