Hailed as a “wonderful pianist” with “absolute devotion to the music” and “admirable technique” (Globes), pianist Shir Semmel has performed in Europe, the United States, and her native Israel to critical acclaim. Praised for her “unstoppable energy and personality” (timesunionPLUS), her performances have been described as “gripping from beginning to end” (The Jerusalem Post).

Semmel has recently been invited by Sir András Schiff to play recitals throughout Europe as part of his “Building Bridges” series, created to highlight young pianists of unusual promise. First Prize winner of several competitions, she has participated in international festivals such as the Ravinia’s Steans Music Institute, [email protected], IMS Prussia Cove, IMS Open Chamber Music, the Gstaad Piano Academy at the Menuhin Festival, Mänttä Piano Festival in Finland and the International Keyboard Institute and Festival in New-York. She has appeared in such venues as Carnegie Hall (Weill and Zankel), Merkin Hall, Steinway Hall, Shriver Hall, Lincoln Center’s Rose Theater and Rose Studio, the Jerusalem Theater, Tel-Aviv Museum and many more. Future engagements include concerts in Israel, the United States (west and east coasts), Germany (including at the Konzerthaus Berlin) and Switzerland.

​An avid chamber musician, Semmel cofounded the Jerusalem Piano Duo together with her brother, pianist Dror Semmel, and is also on the roster of the Manhattan Chamber Players. She has collaborated with such artists as Gilbert Kalish, Colin Carr, Isabel Leonard, Hagai Shaham and members of the Chamber Music Society of Lincoln Center. As a former member of Carnegie Hall’s Ensemble ACJW, she performed regularly at Carnegie Hall among other venues and worked to engage with the community and enhance music education throughout New York.

​Many of her concerts were recorded for the radio and some have been released on CD. A consistent recipient of the American-Israel Cultural Foundation excellence scholarships, Semmel has worked with renowned pianists such as Sir András Schiff, Murray Perahia, Richard Goode, Robert Levin, Jonathan Biss, Yefim Bronfman, and many others.

​In addition to her busy performance schedule, Shir has also taught undergraduate piano and chamber music students at Stony Brook University. She has given masterclasses in schools and universities in the US, and led workshops at the Juilliard School in New York. 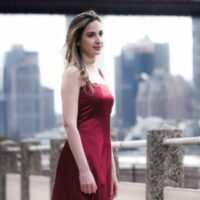