Born in Rochester, NY to Israeli parents, Shira split her time growing up between Israel and the States. She and her family moved back to the US when she was 10; she knew three words of English at the time.

“The first night at our new home my parents left me a gift on the bed, the Beatles blue & red collections from 1962-1970,” Shira says. “Not only did they teach me English, but they changed my life forever. I started to sing along and my brother, who is also a musician today, noticed. One day he played for me the album Ella & Louie. I had it on repeat for a solid year. I felt Ella Fitzgerald was healing me with her voice. I wanted to do that too, I wanted to heal through music.”

Shira met producer Paul Carbonara (Blondie) as a performer in New York’s vibrant theatre community. After working together on two Off Broadway musicals they went on to record two albums of Shira's music produced by Carbonara along with an ace six-piece band, including Grammy-nominated drummer Dan Pugach. The 1st one, Till the Sun Comes and the new EP, Birds of a Feather. Together they created a live folk-acoustic sound so raw you could almost hear the wooden floors creaking under their feet. Shira calls her sound fairy-folk; infused with her sensational ukulele stylings, her music is reminiscent of powerhouse singer-songwriters like Ingrid Michaelson or Sara Bareilles.

“When I wrote and recorded these songs… I was single, very single. Enjoying long conversations with myself as I wash the dishes single,” Shira says of new EP. “As these songs were coming out of me, I realized, I don’t need anyone, but I want someone. Someone to love deeply and passionately who still feels like home. Now, a year later, I know every single song was really written about the incredible human I found and found me before we even met.”

Shira anticipates that her upcoming songs resonate in the same way first single “Usually” has, about the excitement of something good on the horizon. She hopes to share a message of hope, in the same way those first records she owned did for her.

“About 10 years ago I served in the Israeli Army band, which is very similar to a USO tour. Right after I joined, a war broke out between Lebanon and Israel, and I was sent to perform for soldiers and civilians living in war zones. There was one performance that made me realize why this is what I have to do,” she says.

“We arrived at an underground bomb shelter where about four families were staying with very small children. We sang for them and with them, we told stories and performed skits. We were about to leave and a six-year-old girl wearing a summer dress covered in butterflies ran up to me and held on to my leg asking me not to leave because I made her feel safe again. I knew this was my calling and I had to do it, to bring healing to the world through music.” 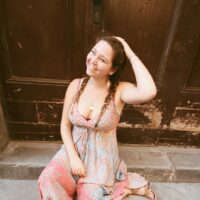