Singer and AICF scholarship 20-21 recipient Shiri Maor, is a graduate of the Municipal Conservatory since 2012 and a student of the teacher and opera singer Alon Harari. Playing the piano since 2008. A graduate of Ben Gurion High School's music department.

Graduate of the Program for Outstanding Singers of the Music Center in Mishkenot Sha'ananim in Jerusalem under the direction of Dr. Zvi Zemel since 2017.

Shiri has been a soloist in the Cantabila Choir, conducted by Shlomit Madar Performances, choir conferences, competitions in Israel and abroad, and productions with leading artists in Israel (Yoni Rechter, Amir Dadon among others).

Shiri has been at the children's choir Inbalim, conducted by Orit Shiloach and soloist in the children's opera "The Dream Fixer". Volunteer performances in the community, Holocaust survivors, city and school ceremonies.Participation in Eyal Shiloach's "International Masterclasses" since 2016 with the singer in Bat Marom Bracha Kol and more. The “musical youth camp” and masterclasses with Sharon Rostoff. Shiri performed with the Camerans Orchestra for outstanding soloists.

Shiri performed in the classic series Music Time at Beit Sergei, Jerusalem as a soloist (Nov 2021), as well as a performance in Gola Petah Tikva (July 21). Commendation in Paul Ben Haim Competition (2019) Lions Scholarship (2020), Ronen Foundation Scholarship (2019), and commendation in Or Tzir Competition (2017). Shiri also won scholarships for excellence and contribution to the community on behalf of the Petah Tikva Municipality and the Conservatory. Recognition as a gifted musician by the Ministry of Education and passed with highest excellency recital. 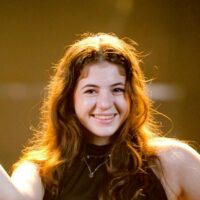