Tali Roth has been hailed by Classical Guitar magazine as “an extraordinary solo and chamber musician” by The NY Times as “a marvelous classical Guitarist”.
Her recent engagement includes recording all Classical Guitar tracks for the Woody Allen film “You Will Meet A Tall Dark Stranger” that has been released in 2010.

Since her Carnegie Hall debut with the Juilliard Orchestra, she has performed as a soloist throughout the United States, Europe, Latin America, and her native Israel, appearing in such venues as Carnegie Hall, Lincoln Center’s Alice Tully Hall (with violinist Midori), the Caramoor Center, the Aspen Music Festival, the Tel Aviv Henry Crown Hall, Teatro Solis ,Uruguay with glamourtango, Hayuza teatre ,Tokyo with Kumatubara and Silvia Duran dance companies and Teatro Presidente in San Salvador with the El Salvador National Symphony Orchestra.

In addition to her solo recitals, Ms. Roth has performed in a variety of settings — as an ensemble player with tali roth trio, on live television and radio in the U.S. and abroad, on stage in the New York Off-Broadway musical production of Nobel Laureate Derek Walcott’s The Odyssey, by invitation for the U.N. in Washington, and for dignitaries such as former Prime Minister Shimon Peres, Prime Minister Ehud Barak, and General Colin Powell.

Among her prizes and awards are Top Prize in all categories at the Twenty-Third Masterplayers Music and Conductors Competition in Switzerland, First Prize in the Israeli National Guitarist Competition, and the New York Artist International Competition Award.

Ms. Roth studied with Joseph Urshalmi at the Jerusalem Rubin Academy and subsequently with Sharon Isbin at the Juilliard School, where she earned her Master of Music degree. She has also trained at the Academia Chigiana in Sienna, Italy and the Cologne Academy in Germany, studying under Oscar Ghiglia and Hubert Käppel, respectively.

Tali Roth is heading the guitar program on the faculty of the Juilliard School’s Pre College Division. She is also an adjunct professor at NYU. In addition, she has presented master classes throughout the United States Japan and Latin America and has taught at The Aspen Music Festival. 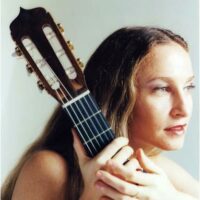