Talia Benabu uses chance marks, tones and textures to create ‘spaces of composed chaos’ defined by simultaneous events of rhythm and movement. She works works in different printmaking techniques, painting and performance. She studied Art History and Philosophy at the Hebrew University of Jerusalem (2007-2010) and Fine Arts in the Master Class Program of the Jerusalem Studio School (JSS) (2009-2012). Talia was born and raised in Jerusalem and has lived as artist in Haifa. She has been living in Germany since 2014, currently in Berlin.

In 2017 she was awarded a grant for the A.I.R Artist Residency print-workshop Skövde in Sweden, she has also been an artist in residency at the Grafikwerkstatt Dresden and Alte Feuerwache Loschwitz in 2015 and 2016. Her monotype print “Yours in the last house before the unknown” is in the Konstmuseet Skövde collection. 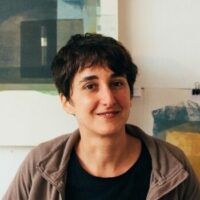