The physical place Tamar lives in is a site, one site among many, in a gigantic and dynamic network of sites, some physical, other digital. All these sites comprise the environment Tamar lives in. Her art attempts to decipher this contemporary environment and describe it visually as a new kind of landscape or space, one based on interconnection, hybridization and repetition.

Is the distinction between real and virtual still valid or do both now comprise a unified space, a hybrid that negates their separate existence? Her art is in the frayed remainders of the seams between these domains. It attempts to redefine terms like “place” and “space” in a culture where a small room with a computer is a gateway to a vast territory that no map can describe and whose dimensions are no longer significant.

Tamar's work is influenced by classic landscape paintings like those of Corot and Poussin, but at the same time by contemporary architecture, internet found images, representations of network architecture, and contemporary artists dealing with urbanism such as Sarah Morris.

Although her work references digital worlds, she prefers to work manually since materiality is important to her and she would rather preserve it. Tamar chooses to work with “old” and basic materials such as soil, water colors, ink and felt-pens because she feels that the questions about the “place” and it’s boundaries that her work raises are “old” and basic questions, ones that have always been asked.

Before art studies – research & development work in the computer industry. 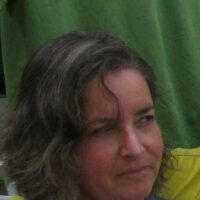