Tamir Gur was born on 1995 in Israel. When he was in the 8th grade Tamir began studying tuba with Ya’akov Kelling at the Givatayim Conservatory. Within four months, his auditioned for the Thelma Yellin High School for the Arts in Givatayim was accepted. From grade 9-12, he studied at Thelma Yellin in the classical music department.

During his sophomore year, Tamir switched teachers to Yuval Zolotov, also through the Givatayim Conservatory. While studying with Yuval, Tamir received large scholarships from the America – Israel Cultural Foundation during the years 2010-2015. In addition, he received excellence scholarships twice from the Hava Stern fund.

At age 17, he was chosen to represent the conservatory in a ceremony in which the Police Orchestra took part. Tamir played the piece “Solo Pomposo,” a piece written for solo tuba and wind orchestra, as a soloist with the orchestra.

In December 2011, Tamir joined the ranks of the Young Israeli Philharmonic Orchestra, run by the Jerusalem Music Centre. He played tuba with the orchestra in four different projects up until July 2013, when he joined the IDF. During this time period Tamir took part in a brass quintet at the Jerusalem Music Centre and the Thelma Yellin high school (in cooperation with the David Goldman program for young excelling musicians.)

In April 2012, he took part in master classes with the British tubist Oren Marshall. In the summer of the same year, he flew to the Aberdeen International Youth Festival (UK) with the Afula Youth Orchestra.

When he was a senior in high school, Tamir was chosen to play as a soloist with the Thelma Yellin Symphonic Orchestra in what was called the “Concerti Concert” in March 2013, and was the first tuba player in the history of the school to be given this honor. Five soloists chosen from amongst the senior class played in the concert and Tamir played the first movement from the tuba concerto by Vaughan Williams, accompanied by the orchestra.

Tamir played continuously with the Youth Orchestra of Givatayi’im, and throughout the years also played in the Yuvalim orchestra and the Bney HaKibutzim orchestra, as well as the Afula Youth Orchestra. He was also a principle tuba player in the Thelma Yellin orchestra and the Young Israeli Philharmonic for two years.
Tamir served as a tubist in the IDF orchestra from 2013-2016 as well as in the orchestra brass quintet in cooperation with the Jerusalem Music Center. The quintet is run by Ram Oren.
On February 2016, during his army service, Tamir won the second prize in the national wind players composition: Noshfim in Kfar-Saba. In the final concert, Tamir play the first movement from the tuba concerto by Vaughan Williams, accompanied by the Haifa Symphony Orchestra, Conducted by Vag Papian.

As of 2014 Tamir studies privately with Ariel Sason, and is now beginning his eight year of tuba studies with the scholarship for 2015-2016. 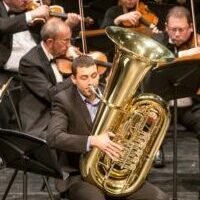