Vocalist, composer, lyricist and pianist Tamuz Nissim from Tel Aviv, Israel has been living and performing in NYC for the last seven years. She performs alongside with some of the city's most acclaimed musicians in International Jazz Festivals and clubs like the Blue Note, Jazz Forum, The Bar 55, Deer Head Inn, Lincoln Center and many more, gaining the love of music lovers and Jazz aficionados alike.

Her debut CD “The Music Stays in a Dream” (2013) featuring her original compositions was presented in radio stations worldwide and in several festivals such as the Athens Technopolis Jazz Festival, the Preveza Jazz Festival, the Montofoli Festival and the Tinos Jazz Festival. Her performances won warm reactions from the audience and the press, describing Tamuz as a “very charismatic artist” (BHMagazino), “a voice that caresses your soul” and “a proof that jazz is a living art and that stars are still being born” (Athens Digital). “An extremely gifted jazz singer that is bringing in her debut album a lot of freshness.” (Third Ear, Israel). Her composition “Broken Promises” has been featured in the Greek Jazz & jazz magazine CD compilation “Summer jazz Flirt ”.

She is a member of the Jared’s Pauley's Band and has recorded and contributed original lyrics at his last release “On Capitol Street” (Ropeadope 2019) alongside Mike Clark, Duane Eubanks and others. In 2020 she recorded the Israeli song "Ha'omnam" on guitarist Roni Ben Hur's record "Stories" (Dot Time Records). The record features jazz Legends Victor Lewis, George Cabales, Harvie S and Ingrid Jansen. The record charted on the Jazzweeks Charts and received raved reviews.

Born in Tel Aviv, Tamuz grew up in an artistic family; her mother is a dancer and a choreographer and her father is a writer. Both of them play an instrument and have a great love for classical and jazz music.

She started playing classical piano at the age of 6 and started to sing when she was 14 and was accepted to the Jazz music department of the Ironi Alef High School of the Arts. Her high school band appeared twice at an open stage at the Tel Aviv Jazz Festival. At this time she was a recipient of the America-Israel Coltural Foundation Grant for young talents in the arts. By the age of 16 she was performing around the city regularly with some of Israel's best jazz players to accompany her. In 2005 she sang in the soundtrack of Ilan Heitner’s movie ‘Bruno in Love’

She moved to the Netherlands in 2007 to study at the prestigious Royal Conservatoire of Den Haag; from there she received a Bachelor’s degree in Performing Arts, voice and side subject

piano. In Holland besides many performances at the local Jazz clubs she also performed at the Amsterdam Israeli film Festival “Filmisreal” 2011 and her composition 'Shir' was featured in the Record “Love, Live, Listen 2 - The Hague playlist” . In 2013 she performed at Holon Women's Festival in Israel, a common project with singer Martha Mavroidi. In 2015 was chosen as a finalist at "Riga Jazz Stage international vocal competition" and won to performed at "Riga Ritmis" International Jazz Festival in 2016.

The records was co-produced with bassist Harvie S, and alongside with this great jazz luminary it features guitarist George Nazos, and drummer Tony Jefferson and pianist James Weidman (on the 2018 release only). All the players are accomplished performers who have worked with a host of remarkable vocalists: Bassist Harvie S with Sheila Jordan, pianist James Weidman with Abbey Lincoln's band and Tony Jefferson is a great singer himself. Then there is George Nazos, whose guitar work has lent an essential element to Nissim’s music for the last ten years.

In 2017 she published "Liquid Melodies" a common CD with guitarist George Nazos where they present combination of jazz standards and "Originals that are so smart they can bend light." (C Michael Bailey, All About Jazz). Their record got extensive airplay worldwide, reached #57 in the Jazz Week charts and got warm reviews from the Jazz press. Their arrangement for Gershwin's Fascinating Rhythm was chosen for Jeff Hanley's show ‘Jazz Happening now’, an NPR one hour show that is broadcasted in 43 radio stations around the States.

The band was also chosen to warm Hugh Masekela at the Atlanta Jazz Festival.

“Capturing Clouds” charted on The Roots Radio Charts for 12 weeks peaking at #6 , at NAAC Radio Charts peaking at #12. “Echo of a Heartbeat” charted on the JazzWeek charts. Both albums are still being played in more than a 100 radio stations around the USA, Canada, South America, Japan, Europe, Africa, Australia and Israel. 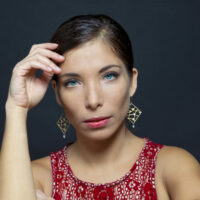