Israeli conductor Taum Karni is active in the field of opera and contemporary music, with an emphasis on a-cappella contemporary choral repertoire and improvisation. Taum is artistic director of Carmina Israeli Singers Ensemble, which she founded in 2011 with the aim of creating artistic, thought-provoking, humorous and multidisciplinary performances of choral music in Israel. Taum is also co-conductor of the pan-European REVOICE International Vocal Ensemble and is artistic director of Vox Feminae Festival 2019 in Israel. Taum works as a freelance conductor, workshop leader and adjudicator, with special emphases on peacebuilding and multidisciplinary performance. Taum was the conductor of Tel Aviv University’s Student Chamber Orchestra in 2012-2017, as well as resident conductor of the Israel Women Composers Forum.

Taum has studied conducting and musicology in Tel Aviv University, the Conservatorium van Amsterdam and the Royal College of Music in Stockholm, as well as private opera conducting studies with Aharon Harlap. As a musicologist, her research focuses on contemporary vocal performance practice. She has worked with dozens of professional and amateur choirs and orchestras in Europe, Israel and Japan, as conductor, jurist and workshop leader over the past 12 years. She is trained in mediation and circle processes, and is active in educational, social justice and conflict transformation projects such as Common Ground Voices.

Taum has conducted the Latvian Radio Choir, the Danish Radio Vokalensemble, KMH Vokalensemble – made up of members of the Swedish Radio Choir, Stuttgart Kammerchor, Gaechinger Kantorei, Voces Nordicae, Manado State University Choir of Indonesia, the Stuttgart Baroque Orchestra, Stuttgart Kammerchor, and the Sweelink Baroque Orchestra. She has attended masterclasses with Eric Ericson, Grete Pedersen, Gunnar Eriksson and Tõnu Kaljuste. In the field of contemporary instrumental music, Taum was a mentee in Meitar Ensemble’s Tedarim Project, and directed new music/performance ensemble Wild Blossom Amsterdam. Taum has been supported by the Elton John Scholarship, the Erasmus scholarship and the America-Israel Cultural Foundation scholarships in choral conducting. In 2013-2014 Taum won the Gary Bertini Scholarship, awarded every two years by the Bertini Family and the Israeli Ministry of Culture to one promising Israeli choral conductor. 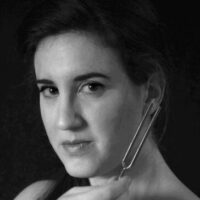