Toby Klein Greenwald was born in Cleveland, Ohio, where she published her first poem at seven and directed her first play at eleven. She is a graduate of Jerusalem College for Women (Michlala), of Hebrew University and of Bar Ilan (M.A.). Her thesis was a comparison of how three women’s theater groups interpreted the biblical character of Naomi for the stage. She has presented at conferences in Israel and abroad, including on culture at the YU Orthodox Forum, and has taken courses in theater, photography, dance, the Great Books, graphic art and more.

She is a theater director, playwright, journalist, poet and teacher of creative writing, theater and Bible. She has founded, co-founded and/or directed more than 12 theater companies or educational theater projects. She is the artistic director of Raise Your Spirits Theatre, in which capacity she has co-authored/authored six biblical musicals, the co-founder and producing director of the Dor L’Dor Interactive Theater Troupe which grew out of the award-winning psychology website WholeFamily.com, founded in 1996, of which she is co-founder and editor-in-chief. She founded and directs the bi-lingual Na’na Playback Dance Theater.

She lectured in Playback Theater in the Institute for Expressive Art Therapists in Jerusalem College for Women and created a new method called Biblio-Playback (or Playback Midrash) on which she gives workshops in Israel and abroad, and lectures also on Cinema Midrash. She has done theater projects with teens at risk, with victims of terror, with teens under fire in Sderot, and with other special population groups.

Toby Klein Greenwald is an ATARA board member and presenter at the 2018 Jerusalem conference, where she produced a day of master classes and an evening of eclectic performers, lectured on the healing power of theater and gave a workshop on Biblio-Playback.

She is the translator of In the Land of Prayer, the editor of The Golden Pens of Gush Etzion, the co-author, with Dr. Michael Tobin, of a marital self-help novel (in Hebrew), and the initiator and editor of the acclaimed Listening to God, by Rabbi Shlomo Riskin. She has published widely in newspapers and magazines in North America and Israel.

She is the recipient of:

The Yaakov Egerest Memorial Award for Jewish Culture, of the Torah Culture Department of Israel’s Ministry, for her work in educational, community and Jewish theater.
The Ohr Torah-Shavei Rachel award for her educational Jewish theater work.
The Lifetime Achievement award from ATARA – The Association for Torah and the Arts – for “dedication and contributions in creative education, journalism, theatre and the performing arts worldwide”. 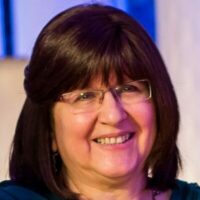