Udi Aloni (b. 1959 in Israel) is a filmmaker, writer, and artist whose work focuses on the interrelations between art, politics and theology in Israeli-Palestinian history and German-Jewish philosophy. He began his career as a painter, establishing the radical Bugrashov gallery in Tel Aviv. His movies and visual art projects have been presented in various leading museums, galleries, and film festivals around the world, among them the Metropolitan Museum in New York, the Israel Museum in Jerusalem, and the Berlin, Toronto, Tokyo, Locarno, Tribeca, and Buenos Aires film festivals. In all of his activities, including university lectures, conferences and demonstrations, Aloni is a strong voice in promoting justice, peace, and solidarity between Israel and Palestine. His work includes correspondences with the most pre-eminent philosophers of our time, including Slavoj Žižek, Alain Badiou, Avital Ronell, Judith Butler, Naomi Klein, and Tony Kushner, who describe him as a unique and revolutionary thinker. For the last twenty years, Aloni has concentrated on making films and writing. 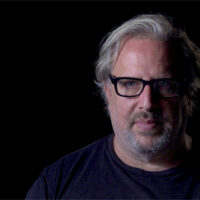