Uri Netanel was born in Jerusalem and lives in Holon, Israel. After completing his B.Mus at the Rubin Academy of Music and Dance in Jerusalem he graduated with an M.Mus from the Tel Aviv Academy of Music. Among his teacher were prof. Zvi Avni, prof. Yitzhak Sadai, prof. Leon Schidlovsky (composition) and prof. Shmuel Magen (‘cello). In his catalogue of works are songs, chamber music, orchestral and choral music.

Two Love songs to lyrics by his grandfather, Gedalyah Marmur, performed by Ayelet Cohen, soprano and the Carmel string quartet, were broadcast in Kol ha Musica, Israel’s classical radio station. His works were performed since 1981 in various places in Israel, among them the Felicia Blumenthal Music Center in Tel Aviv (2016), the Jerusalem Music Center (2015) and Kibbutz Sde Boker (the Sounds in the Desert Festival, in which his Trio for flute, viola and ‘cello “Homage to Arnold Schönberg” was recorded by the acclaimed Meitar Ensemble, 2015, and in which his “Psalm 106” was sung in Hebrew and Arabic by Katerina Ray-Chepelev, Marina Gurevich and Leonid Axelrud, accompanied by the Spectrum string quartet, 2017).

Participated in the “Liberty-Otherness-Responsibility” project of the Modalius Ensemble with his work “Africa” (performed in BeerSheba, Israel, 2016) and in the “New Music on the Bayou” festival in Louisiana, U.S.A with his work “Nouri” for flute, guitar and ‘cello.

Performs as a ‘cellist and as such participated in the “Speaking Arts” conferences in Jerusalem, hosted by the Jerusalem Foundation and the Jerusalem Inter-Cultural Center, promoting the Arab-Jewish dialogue in the performing arts, which were held until 2012, and in a similar musical encounter in Neve Schechter, Tel Aviv, in 2013. 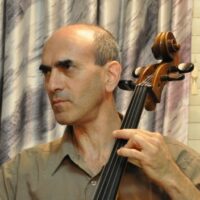