Winner of the 2018 Prime Minister’s Award for Composers, Udi Perlman (b. 1990) is an Israeli composer who’s work has been hailed for its “fascinating texture” and “elegant structure” and described as a “demonstration of ingenuity and great drive” (Haaretz).

Perlman’s works have been performed in Austria, Germany, Israel, Italy, Spain, Poland, Sweden, Switzerland and the United States. Notable works include Yama, commissioned by the Gesellschaft für Neue Musik Mannheim for the International Ensemble Modern Academy in 2019, Say now: Shibboleth, commissioned by the Israeli Music Institute for the Israeli Contemporary Players in 2018, Alila for string quartet, premiered in 2018 in Milan at the Galleria d’Arte Moderna by members of the West-Eastern Divan Orchestra and the Barenboim-Said Akademie, and Concerning Spring for symphony orchestra and choir, commissioned by ‘Wrocław: European Capital of Culture 2016’. Other forthcoming and past performances include pieces for the Israeli Chamber Players, Meitar Ensemble, Neon Ensemble, MultiPiano Ensemble, Tremolo Ensemble, Syntagma Piano Duo, Philharmonie der Nationen and Israel Sinfonietta Beer Sheva.

Perlman was Composer-in-Residence at Herrenhaus Edenkoben in southwest Germany in 2018. He won the Klon Prize of The Israeli Composers League, 1st Prize at the National Composition Competition of the Israel Conservatory, as well as prizes from the Hamburger Camerata’s International Composer Competition and the Pnina Avni Competition. He received scholarships from the America-Israel Cultural Foundation, the Siday Fellowship for Musical Creativity and the Baden-Württemberg-Stipendium. From 2014 to 2016 he was a composition fellow of Meitar Ensemble’s Tedarim Project for contemporary music.

​Originally from Tel Aviv, Perlman was the first student accepted to the Artist Diploma program in composition at Barenboim-Said Akademie in Berlin, studying with Jörg Widmann, which he completed in 2018. Previously, he studied with Wolfgang Rihm at the Hochschule für Musik Karlsruhe in Germany. Perlman earned both his Bachelor’s and Master’s degrees in composition, as well as a B.Ed. in music education from The Jerusalem Academy of Music and Dance, where he studied with Yinam Leef and Menachem Wissenberg.

​Presently, Udi resides in New Haven, Connecticut with his wife Shira, a literary scholar and translator. 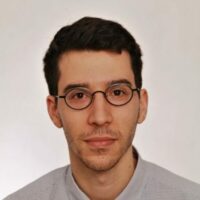