Vera Vaidman, a Tel-Aviv-based Israeli violinist, has been heard on important concert stages on four continents – as a soloist with orchestras, recitalist, participant in chamber ensembles, and leader and artistic director of a conductor-less Ramat HaSharon Camerata chamber orchestra. She has performed under the baton of Zubin Mehta, Rudolf Barshai, Gerard Schwarz, Lukas Foss, Sidney Harth, André Kostelanetz, Mendi Rodan, among other conductors. At the Marlboro Festival, she played and recorded with Rudolf Serkin, Andras Schiff, Philipp Naegele, Madeline Foley, and others. She also took part in the Esbjerg International Chamber Music Festival in Denmark, the Gotland and Sommarmusik på Näset festivals in Sweden, St. Cyprien International Festival in France and Israel’s Upper Galilee Chamber Music Festival, and went on European tour with a group of the latter’s participants.

Vaidman has toured Europe on numerous occasions as recitalist and soloist with various orchestras, performing, inter alia, the entire Bach violin solo repertoire, the complete Beethoven violin sonatas (with her husband pianist Emanuel Krasovsky) and, on Paul Hindemith’s 100th birthday, his violin concerto at the Hindemith Festival in Stuttgart, Germany. In Jerusalem, she gave the world premiere of the violin concerto by Israeli composer Alexander-Uriah Boskovich, 60 years after its completion. In the US, she gave recitals in New York (at the Merkin Hall and in the Bargemusic series), Washington, D.C., Chicago, New Haven, Rochester, N.Y., and at the Oberlin, Smith and Dartmouth Colleges.

Born in St. Petersburg, Russia, she studied at the Moscow Music School for gifted children and later at the Moscow Tchaikovsky Conservatory. Her teachers there were Boris Belenky and David Oistrakh. Upon arriving in Israel, she participated in the master-course by Isaac Stern at Jerusalem Music Center.

For the last decade, she also performs on viola with increasing frequency.

This outstanding recital serves to introduce a remarkable new Russian/Israeli violinist, of whom I am sure we shall hear much more […] This is a record to treasure.

In Vaidman’s performance, the concerto [by Beethoven] was presented with burning passion and strong, many-faceted emotion. Her type of identification with the meaning of the music and her absolute security with the technical aspect of playing produced the magic of the birth of a work of music in front of us, here in the Bartok Hall. 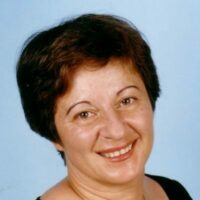