As soon as the Russian-born Israeli, tieless and sleeves rolled up, strolled out to make his way to the piano, there was something different in the air. His warm smile, unassuming presence, and gracious bow exuded an ease rarely, if at all, seen on recital stages. Pickman Hall already began to feel more like a living room; the audience, friends invited over for an evening of music.

Even before playing the first notes of the opening piece, there were quite a few things to observe. If you can imagine a hitter coming up to the plate, digging in, taking half-swings in preparation for the first pitch, you might get some idea of the prepping Goldberg did.

When the sounds of Scarlatti’s familiar Sonata in E major began filling the room, expressive movements of Goldberg’s hands and body accompanied them. Even his face told much about music. The softest of trills and sudden surprises all seemed effortlessly induced.

Goldberg and the piano were obviously inseparable the entire evening. Longy’s brand new Steinway D piano, which has only just started getting broken in, really underwent some serious testing this evening, with Brahms’s Variations and Fugue on a Theme of Handel. Goldberg exposed a considerable range of the high-performance instrument’s assets. Arms up in the air, hands knowing their exact destination on the keyboard below unleashed a gigantic ending. It seems that there might be an epidemic of sorts, with the Variations and Fugue receiving Boston performances three times in as many weeks. This rendering measured up to-if not surpassed-those of previous high-profile artists.

From epidemic to rarity, it has been quite a while since Haydn’s historically significant and much praised Andante and Variations in F minor has been heard in concerts around the town. Goldberg’s intimate, touchingly sad and happy contrasts came close to making real the sobbing and elation Haydn inventively composed around a minor/major key scheme.

Again, Goldberg took to his black handkerchief, wiping the middle range keys dry then mopping his whole face. He settled in, and out came those “hammerless” strokes required by Debussy. Three preludes from Book I and Etude Pour les Arpèges Composés-more virtuosity, though virtuosity always subservient to poetry. He playing engulfed us, bathed us, imbued us in light. Sudden bursts, those the French call éclats, sparkled, brilliantly lighting up the Debussyian landscapes.

From the natural to the mystical, Goldberg chose another gem, Scriabin’s Sonata no. 5 in f sharp major. Now, the entirety of the piano’s capabilities allowed for the emotional and physical extremes of the mystic Russian composer and the Russian-born Israeli. The pianist’s instinct for weaving the yearning, the spirited, and the ecstatic through all of their minute and bold confabulations held the living room audience in a state the composer intended.

After the most unexpected and explosive of endings penned and here performed, the audience rose to their feet in recognition of this most remarkable recital. The exuberance of the audience was met with the unassuming pianist’s sincere expression of thanks to Pro Musicis for its support and the audience “for coming to hear me play,” and more pianistic and poetic wonder from his Tchaikovsky’s, October: Autumn Song from The Seasons and Chopin’s Marche Militaire. 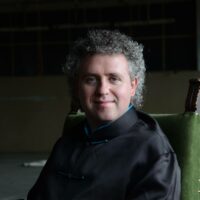