A captivating presence on the concert scene, award-winning Israeli-American pianist Yael Weiss has been hailed by many of today's greatest musicians and critics for visionary interpretations of surpassing depth, immediacy and communicative power. Following a recent recital, the Washington Post portrayed her as “a pianist who delves deeply and tellingly into that cloudy area where fantasy morphs into improvisation, inventiveness being common to both.”

Ms. Weiss has performed across the United States, Europe, Japan, Korea, New Zealand and South America at such venues as Carnegie Hall, Lincoln Center, the Kennedy Center, Benaroya Hall, Moscow’s Bolshoi Hall and London’s Wigmore Hall. Her New York recital debut, presented by the Metropolitan Museum, was acclaimed by the New York Times as, "remarkably powerful and intense . . . fine technique and musicianship in the service of an arresting array of music." Ms. Weiss has appeared as soloist with many international orchestras, including the Prague Chamber Orchestra, Jerusalem Symphony Orchestra, the Seattle Symphony, Santa Fe Symphony, Israel Chamber Orchestra, and the Brazil National Symphony, to name a few. She is also in demand at international music festivals, such as Marlboro, Ravinia, City of London, Banff, Parry Sound, Caramoor, Hornby Island Festival, Changwon International Festival, and the Seattle Chamber Music Festival.

A significant part of Ms. Weiss’s current touring schedule is devoted to her international commissioning and performance project, “32 Bright Clouds: Beethoven Conversations Around the World”. This groundbreaking endeavor brings together composers from 32 countries of conflict and unrest throughout the world, joined together in sending a message of oneness and peace. Each new composition is inspired by one of Beethoven’s 32 Piano Sonatas, and the entire cycle of new works is unified by a single “peace motif” from Beethoven’s Missa Solemnis.

Ms. Weiss has presented “32 Bright Clouds” recitals in Korea, Cuba, Austria, Canada and in venues throughout the US, performing programs that combine Beethoven with new works from around the world. Her 2020 recital for the Smithsonian Institution was featured on NPR’s “All Things Considered” and was attended by audiences internationally via YouTube Premiere.

An advocate for the power of music in the service of peace, Yael Weiss has been interviewed on the WWFM Classical Network’s “A Tempo” and “Between the Keys” shows. She has also been a frequent guest on American Public Media’s Performance Today and St. Paul Sunday, on the BBC in London, and on New York’s WQXR and WNYC. Her 2016 recital from the National Gallery was selected for broadcast on WETA’s “Front Row Washington”. She has appeared numerous times on Israeli television, and presented a recital filmed live for NHK television in Japan.

Weiss’s discography encompasses piano works by over a dozen composers, with such releases as “Robert Schumann: Piano Works” and “88 Keys to Joy”, on the Koch International Classics label. Due for release this year is her recording the piano concerto “Aviv”, written for her by composer Joel Feigin.

Ms. Weiss is also devoted to chamber music, and tours worldwide with violinist Mark Kaplan and cellist Peter Stumpf as the Weiss-Kaplan-Stumpf Trio. Their recordings of complete Beethoven Piano Trios will be released in the spring of 2021 on Bridge Records. The Trio’s discography also includes CDs of Brahms, Smetana, Chihara, Lansky and Lerdahl trios, as well as a new-music release, “An American Tour”, featuring world premiere recordings of compositions by American composers Schoenfield, Chen Yi, Auerbach and Newman.

Ms. Weiss has been honored with distinguished prizes from the Naumburg International Piano Competition and the Kosciuszko Foundation Chopin Piano Competition. She is a recipient of the Presser Award as well as grants from the America-Israel Cultural Foundation. She studied with Richard Goode and Edward Aldwell at the Mannes College of Music and with Leon Fleisher and Ellen Mack at the Peabody Conservatory.

Yael Weiss has presented master-classes for top institutions worldwide and served on the faculties of Indiana University’s Jacobs School of Music, UC Santa Barbara and the Heifetz Institute.

Away from the piano, Yael Weiss is an avid runner, regularly taking part in marathons and other long-distance races. Born in Israel, she currently makes her home in New York City. 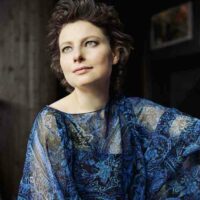