Born in Israel and raised in a kibbutz, Yarden began his dance training at the Academy of Music and Dance in Jerusalem and continued his studies on full scholarship at the Bat-Dor School of Dance in Tel-Aviv, under the artistic direction of Jeannette Ordman. In 1996, Mr. Ronen joined the Israeli Bat-Dor Dance Company, where he performed work by renowned choreographers including Lar Lubovich, Ed Wubbe, Nils Christie, and Luciano Cannito, and was featured in the Israeli Opera’s productions of Samson and Delilah and Turandot. In 2000, Mr. Ronen was promoted to principal dancer. While with the Company, he had the privilege of meeting and working with Peridance Capezio Center’s Founder and Artistic Director, Igal Perry, who chose Yarden for a lead role in his ballet Accord/Discord.

Yarden moved to New York City in 2001 and became a member of Ballet Hispanico under the artistic direction of Tina Ramirez, where he worked on new creations with choreographers Ann Reinking, Graciela Daniel, and Ramon Oller. While with Ballet Hispanico, he was a guest performer with Earl Mosley’s Diversity of Dance and Mr. Perry’s Peridance Contemporary Dance Company. In 2003, he joined Buglisi Dance Theater under the direction of Jacqulyn Buglisi and Donlin Foreman, where he had the opportunity to work with notable artists including Christine Dakin and Terese Capucilli.

In 2008, after a fulfilling career on the stage, Mr. Ronen was invited to New York City by Mr. Perry to become the Director of Development and Public Relations at Peridance Capezio Center and as the Executive Director of Peridance Contemporary Dance Company. At Peridance, in addition to developing and overseeing the management the Center, Mr. Ronen is the co-founder and director of Peri-dance’s APAP Showcases, the Certificate Program, BLUEPRINT Summer Intensive, and the Faculty and Student Showcases. 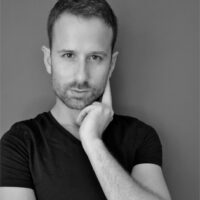