In high demand internationally since becoming a prizewinner at the 1993 Naumburg Violin Competition, Yehonatan Berick enjoys a busy concert schedule as soloist, recitalist, chamber musician, and pedagogue, throughout North America, Europe and Israel.

Berick has performed, among others, with the Quebec, Winnipeg, Windsor, Ann Arbor, Jerusalem and Haifa Symphonies, the Israeli, Cincinnati, Montreal and Manitoba Chamber Orchestras, Thirteen Strings and Ensemble Appassionata.

Berick's Paganini: 24 Caprices is now available on Equilibrium label. On CD, Berick has recorded for the Acoma, Albany, Centaur, Equilibrium, XXI-21, Gasparo, Summit, and Helicon labels. His recording with the Amici ensemble, entitled Contrasts, has won rave reviews in the Canadian press. Other CD features include the Grand Concert for violin, pianoand string quartet by Chausson; The Complete Bartok and Berio Violin Duos; Chamber Music by Paul Ben Haim; The Impossible Dream by Gerhard Samuel ; and Mordechai Seter's unaccompanied violin sonata. Many of his concerts are broadcast on Radio and TV in Canada, Europe and Israel.

As a teacher, Berick is equally sought after as violin teacher and chamber music mentor. Prior to his current appointment as Professor of Violin at the University of Ottawa, he served on the faculties of the University of Michigan, McGill University, as well as the Eastman School of Music and the University of Toronto. He has been invited as teacher and artist-in-residence at Bowdoin Music Festival (Maine), Killington Music Festival (Vermont), The Shouse Institute (MI), The Beethoven Seminar (New York), [email protected] (CA), Keshet Eilon, Sounds in the Valley, and the JMC Young Players' Unit (Israel), and has been featured in masterclasses worldwide. Many of his students hold positions in leading orchestras, ensembles, and universities.

Yehonatan Berick started his musical education at the age of six. Having graduated from highschool at 16, he entered the Tel Aviv University's Music Academy, and completed his studies at the College-Conservatory of Music at the University of Cincinnati, earning a full tuition and a Summa cum Lauda. His principal violin teachers were Ilona Feher, Henry Meyer, Kurt Sassmanshauss, Dorothy Delay, and Yair Kless. He had theory teachings with composer Sergiu Natra, and attended masterclasses with such artists as Isaac Stern, Henryk Szeryng, Max Rostal and Josef Gingold. One of the brightest talents of Israel, Berick won several Clairemont Awards, and received yearly stipends from the America-Israel Cultural Foundation.

Yehonatan Berick is currently performing on a 1761 violin by Carlo Ferdinando Landolfi, generously bequeathed from the estate of Sally Benson to the University of Ottawa, as well as on a violin by Honoré Derazey Père from 1852, and on a viola by Stanley Kiernoziak from 2003. 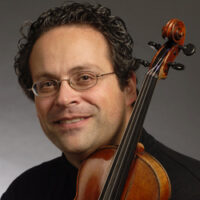