Ynin Shillo (born 1960) is a conceptual interdisciplinary artist, both Israeli and Dutch nationality. In 1989 he began to paint with the encouragement of the artist Motti Mizrachi.

1995-2010 Experimental art ; wandering in the world without money, property and identification papers.
During this period dealt with performance, writing, playing the violin and Kabala study when his main area of expertise is “the order of the letters”.

2015, Was elected to represent Israel by the Florence Biennale’s International selection committee at the X Edition of The Florence Biennale.
In addition invited to present as part of the biennial events during the month of October, 2015 in Florence.
Solo Exhibition,”The Tower of David Museum”, Main venue of “Jerusalem Biennale 2015”.Initiator, Artistic Director and curator of “AVI” Festival (Art Video International).
A member of “the union of the plastic artists in Israel” 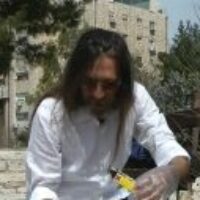