Yonatan was born on 1986 in Tel Aviv, Israel. He is a 2011 BFA honorable graduate
of the New School for Jazz & Contemporary Music. Yonatan started playing the piano at the age of ten at the prestigious Tel Aviv Music Conservatory & from a very early age has performed all over Israel.

He successfully graduated from the conservatory & from the Thelma-Yellin High School for Arts in the jazz department under the instruction of the late great Israeli jazz master Amit Golan.

At 21yrs old Yonatan moved to NYC for his academic jazz studies. Studying at the New School for Jazz & Contemporary Music under the instruction of jazz giants such as Junior Mance, Billy Harper, Reggie Workman, Charli Persip, David Schnitter, Hal Galper & many more.

Since he moved to NYC, Yonatan has had the honor of playing with jazz masters such as Frank Wess, Jimmy Heath, Don Hahn, Ned Goold, John Mosca, Warren Vache & others at the various venues around the city such as Dizzy’s Coca Cola Club, Symphony Space, The Iridium, Fat Cat, Smoke, Smalls, Garage & more.

In 2010 he won the 1st prize scholarship from the ‘Eubie Blake Foundation’ and in May 2011 he successfully graduated as an honorary student from the New School.

Yonatan is a film & TV composer, composing the music for the prestigious international production of an upcoming Israeli film ‘Dancing Arabs’ by director Eran Riklis & for the Israeli documentary ‘Cafe Europe’ by director Tzipi Trope.

Yonatan recorded for many various projects in New York and in Israel.

Yonatan has played on the albums:

Eyal Vilner – Introducing the Eyal Vilner Big Band’. Yonatan is the piano player of the big band. This is the debut album by the big band of the wonderful Eyal Vilner. The album reached to the top of the jazz charts worldwide and has received many praises by jazz critics.

Eddie Henderson & Friends play the music of Amit Golan’. A memorial album for the memory of the late jazz master Amit Golan, an album entirely composed & arranged by Amit Golan. The group playing in the album is led by jazz master, trumpeter Eddie Henderson.

The successful Israeli hip hop band ‘[email protected]’. Yonatan has worked as the beat producer on both albums 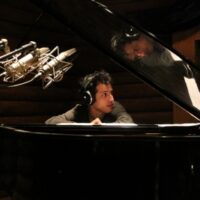