After serving 3 years in the Israeli army he flew to New York, planning to study filmmaking and acting in the best schools he could find.

In NY he studied at Lee Strasburg Institute, where he studied acting, singing and dancing. Later on he continued his studies at HB Studio, where he spent a long time under the late, famous Herbert Berghof and Bill Hickey. Then he studied all aspects of filmmaking at NYU Film School.

By the years 1996-1998 Yuval worked on a feature film called “Orphan Of War” – a 90 min, 35 mm Action/Drama, co-starring the legendary singer from Woodstock “Richie Havens”. In addition to co-producing this film, Yuval had starred in it, co-wrote the screenplay, edited, and came up with a music album called “Peaceful Circle” – based on songs from the film, which he produced together with Mr. Richie Havens.

In the year 1998 Yuval got involved with the NY producer Bruce Weiss and the well known director Charles Lane (“Sidewalk Stories”, “True Identity”) in order to produce a feature called “Kaleidoscope”, written by Yuval and Thomas Mitz, a film which was suppose to be co-starring Wesley Snipes. During that time Yuval decided to go back to his roots and in 1999 he moved back from New York to Israel, were he got married and is having now 4 beautiful kids.

Back in Israel, between the years 2000 – 2008, Yuval played different rolls such as writing, directing, editing and producing, in about 7 different 50-60 minutes documentaries (a full list and/or a show reel is available upon request), most of them are about Judaism and spirituality and some of them were broadcast at the Israeli TV channels.

In 2009 Yuval co-directed, edited and starred in a 70 minutes historical docudrama, called “The Jerusalem Code”.

During the years 2008-2010 Yuval produced, wrote & directed a 63 minutes docudrama, called “Divine Journey To Hollywood”, based on his personal life story, this film played a few times on the Israeli TV and was distributed in more then 2 million copies in Jewish communities worldwide.

During the years 2010-2011 Yuval has worked as a director & writer (together with Or Yashar and Prosper Malka) on a 90 minutes feature film (for the first time in his life as a director of a feature film), called “Hamesima X” (in Hebrew – Mission X), where he is playing also a roll of an editor, producer and an actor. Hamesima X was officially selected to 13 international film festivals, and won a several film awards.

In addition to filmmaking, Yuval also gives lectures both in Hebrew or English in these subjects: Filmmaking, Judaism in modern time, Spirituality VS materialism, The impact of modern media and more… where he is invited by schools, universities and different communities around the world. 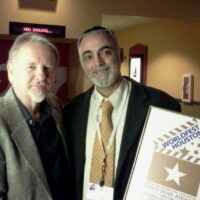