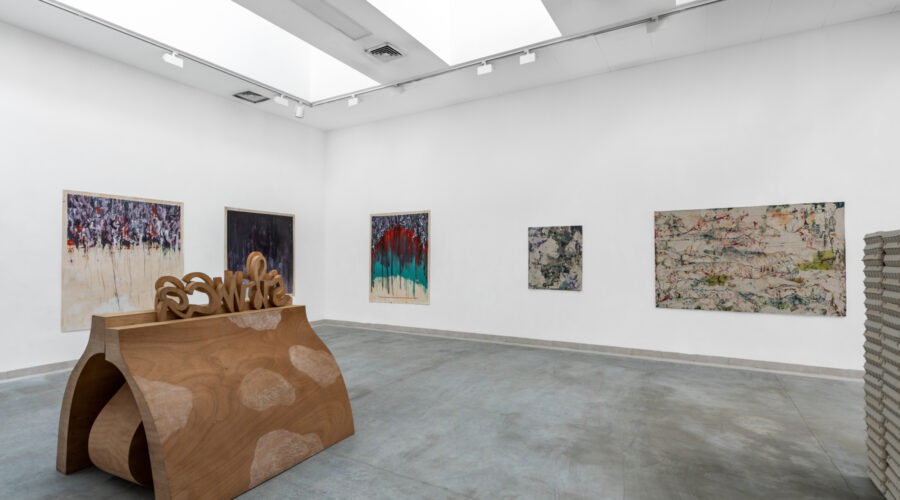 Essentially, Kupferman was a “laborer-painter” who did not wait for inspiration or for the “right moment”, but made his way to the studio every day, prepared to labor, to paint. The exhibition Layer Action traces the Kupfermanian artistic craft, its essence and characteristics, as intertwined in the works of the participating artists. Kupferman’s craftsman presence emerges from these artists’ works, who share his conception of time and the artistic action. Kupferman’s painting act would often begin with ritualistic actions, starting with covering the substrate with an intense green paint, followed by straight, sharp, confident lines that form a sort of grid. Perhaps under the influence of his work as a scaffolder, the grid was for Kupferman the basis for the multiple layers accumulating above it. A basis in the sense of physical foundation, but also in the formal-metaphorical sense: “The horizontal lines are like horizons – different viewpoints on reality – and the vertical lines are like human presences”.1

Next, the painting act becomes somewhat loosened, dispersed in the footsteps of the events on the painterly surface – sometimes stopping and tracing back it steps, and sometimes starting a new chapter. The cumulative layers detail the history of their creation, of the inner dialogue between the artist and his response to the “painting’s requests”. This is a process that shifts from movement through suspension to observation, after which the need arises to scrape off, cover up, peel off, seal and cover again. “I’m not a man of great decisions. I never predetermine the painting. I advance by placing one thing next to the other and one above the other as well”.2

Beyond all the actions taking place in the duration of the creative work, time is omnipresent. That time, which dictates the duration of drying, time for thoughts, memories and new frames of mind. All those intermingle and accrue into acceptance of what is done or into regret and the formation of an additional layer that blurs all that which has already happened on the canvas. Time is what decides the Kupfermanian creative process. Coping with it and cutting the painting action short are perhaps the essence of the entire process. Or as he put it, “In my painting there is no subject, or more precisely, the subject is the time of producing the painting”.3

The image of the grid and its deconstruction is present in Rona Perlman’s works. Sometimes, the constructed motif precedes the deconstructed one, and sometimes it is only at the final stage of the painting action that she “calls it to order” and reorganized that which has been disordered. Kupferman’s oeuvre first infiltrated her consciousness as a painter intuitively. Later on, having delved deeper into it, Kupferman’s heritage gradually became a major source of inspiration. Many of her works are performed over layers of past drawings, which have become a memory encapsulated in the emerging painting, and with it the wondering, when is something valuable created, enough to make her stop.