Anna Fine Foer received an honorable mention from the Hazon “Shmita Project” for her fine art submission, featured here: “That’s Not Land, That’s Sky.”
Hazon is “the Jewish Lab for Sustainability non-profit”, and it held an international arts competition on the topic of “shmita” – a Jewish practice with calls for land to be left unattended for one year out of every seven.

Foer created her work of art from a collage she made years ago as well as other images she had. As the Baltimore Jewish Times writes, “[i]n the shmita spirit of allowing land to rest, [the artist] chose to avoid printing any new materials for the collage.”

Foer herself says: “I made a version of this collage in 2015 during the previous Shmita cycle, while in residence on Governor’s Island with Art Kibbutz International.  As part of the preparation for Shmita and a theme for the residency, we studied relevant texts with a rabbi during lunch.  When Hazon announced the art contest for the current Shmita cycle, I already had my idea which was to simplify the first iteration of the collage to make it more graphic and easily accessible”. 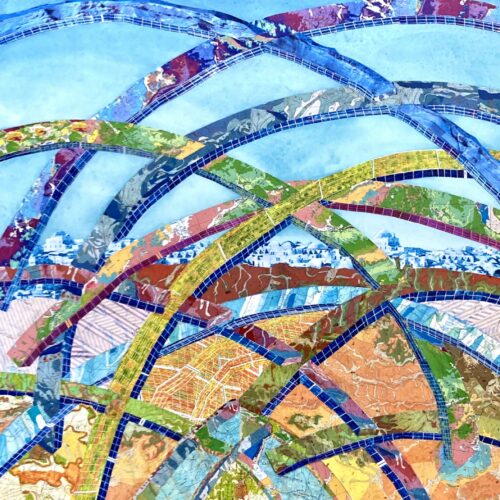