Amir Bar Akiva is a musician and AICF alumn based in Brooklyn, New York. Over the last decade, Amir has toured and performed with internationally acclaimed artists such as Chano Domingues, Dayna Stephens, Ben Allison, Steve Cardenas, and more. He has played at some of the most prestigious venues around the world, including A Love Supreme Jazz Festival, Bansko Jazz Festival, Red Sea Jazz Festival, Sunset Jazz Club, and Tel Aviv Jazz Festival. Originally from Israel, Amir received a full scholarship to move to the U.S. and study drums and composition at The New School. He has studied with masters such as Reggie Workman and Hal Galper. After graduating with highest honors in 2019, Amir has been performing in New York City on a regular basis as a drummer, composer and band leader.

When I got into the Jerusalem Academy for Music and Dance (high school) in 2009, I had the privilege of studying with Yaaki Levy (a past AICF support recipient). Yaaki was my teacher for at least 7 years, and he has been my mentor and close friend to this day. He has always pushed me to my limits and encouraged me to find the deep essence of music. He exposed me to a new world I hadn’t been familiar with before.

My creative journey actually started when I met Yaaki. My perfectionist and absolute personality matched perfectly with his methods. With his guidance, I created my own sound on the drums while exploring a variety of music styles, from pop through rock and of course jazz. Over time, I got to play with more and more musicians. I learned from them; from the older, more experienced ones, and from the younger ones as well. There is still much more to learn. Every time I make music, I discover something new. Whether it’s related to composition, performance, rehearsal or practice. Self-discipline is the key to it all.

I need to be stable financially. The goal isn’t to be rich; the goal is to have enough to create and share the work, to have a peaceful and clear mind, and to know that “you’ve got your own back”. I want to get to the point where the mind is 100% focused on making art and not on survival. I am still young and have my whole life ahead of me, so I believe that with determination and perseverance I can achieve my goals. 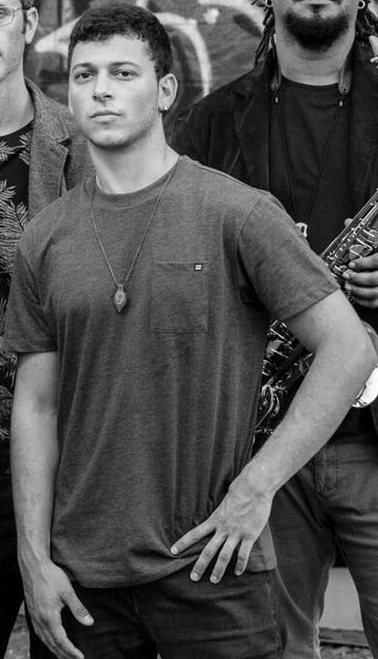 These days I’m a member of Israeli bass player Tal Gamlieli’s trio and Israeli flute player and AICF alumna Hadar Noiberg’s trio, with whom I tour and perform around the world. In New York I get to collaborate with one of my biggest inspirations, the phenomenon Spanish pianist Chano Domingues. We explore jazz together from an Israeli-Spanish perspective, I would say, and it’s pure joy. I also write compositions and perform my music with ensembles that I lead on a regular basis.

What does it mean to you to have organizations supporting art?

As a Grant Recipient of the Foundation, I feel a great honor to be part of this artistic community. The fact that this organization supports artists financially and awards grants, shouldn’t be taken for granted. It helped me tremendously to pay for my studies at the Israel Conservatory in Tel Aviv (Shtriker), and it helped fund instrument-related purchases early on. In addition, as a New Yorker who lives in America right now, the thought of having this organization by my side is uplifting.