Anisia Affek is a Slavic artist based in Berlin. In her multi-disciplinary work, she aims to question our understanding of national and self-identity. She reflects on the role that mythology and folklore plays in the process of shaping and re-shaping modern national identities. Affek’s practice is based on academic writing, installations, and printed matter that challenge our perception of belonging and the recognition of ‘we’ and ‘they’. Her work also has a personal aspect, as it is deeply influenced by her Ukrainian-Russian-Mongolian roots and her growing up as an immigrant child. She works with different mediums, such as photography, film, collages, and textiles, as she provokes our ideologies and ethics about who we are and where do we belong.

What or who inspired you to want to be an artist?
I can’t recall one significant moment in which I felt that I wanted to become an artist, also I am not sure there is such a thing as becoming an artist. I guess that for me, the impulse to create was always a way of living, a form of survival. There wasn’t an option not to create. It’s like, you won’t ask a bee why she decided to go into the honey business, It’s just part of her existence. To be a visual artist is not a profession you choose—it is a way of existence.

What was your creative journey that has brought you to where you are in your career today?
My family is originally from Russia, they moved to Ukraine in the early 70’s, where I was born. Most of my childhood, I spent with my grandparents that were deeply traumatized by World War II. My grandfather was a Mongolian Siberian man that was drafted into the Red Army to fight against the Nazis when he was 17 years old. He was physically and mentally hurt, and after the war, he spent a year in a mental institution. My grandmother was a Jewish woman from Moscow who lost all her family in the Holocaust. Since the beginning, my work was deeply influenced by my Ukrainian-Russian-Mongolian roots. I was trying to understand who I am and why I am, it all comes from there. When I was 10 years old, we migrated to Israel. After completing my bachelor at the Shenkar College in Tel Aviv, I moved to Berlin to do my Masters at Weißensee Academy of Art. Since graduating, I continue to live and work in Berlin. As I got here, I was able to dedicate myself to my work. By becoming an immigrant once again, I placed myself in the position of a stranger, an observer. I found it crucial to my practice.

What are you currently exploring in your work?
My latest project—Zaporozhian Cossack Mythology as Political Agenda,focuses on the design of a modern national identity while using the Zaporozhian Cossacks’ historical phenomena in Ukraine as a case study.  The Cossack brotherhood was a group of East Slavic men who became known as members of a self-governing, militaristic community, around the 15th century. Since the collapse of the Soviet Union and the Ukrainian declaration of independence, the Ukrainian government has been striving to gather its people under one strong nation and has been looking, as many other governments have before, for a symbol. A hero, an image, and eventually a purpose. A magical something that consistently makes people believe that they are connected with one another and willingly give their lives in its name. The Zaporozhian Cossacks have been chosen to fulfill
this mission—to represent the romantic image of the Ukrainian nation seeking freedom and independence.  This project includes two main parts. The first is a book containing an essay which challenges some of the traditional interpretations of the Zaporozhian Cossack’s role in Ukrainian history, and photos which capture the constant rebuilding of the Ukranian national identity. The second part of the project is a series of 4 Rushnyks (traditional Slavic cloth) which I hand-embroidered with symbols and cryptograms. Each Rushnyk is 3
meters long by 0.5 meters wide.

What do you need as an artist today?
As Virginia Woolf wrote in her essay, A Room of One’s Own—”a woman must have money and a room of her own if she is to write fiction”. I feel that this phrase that explores the  relationship between women, art, and economics is profoundly accurate these Corona days, exactly like 70 years ago. As an artist, I need the money, namely, the time. And I need a room, namely the physical and the mental space. I need both to create, to exist. 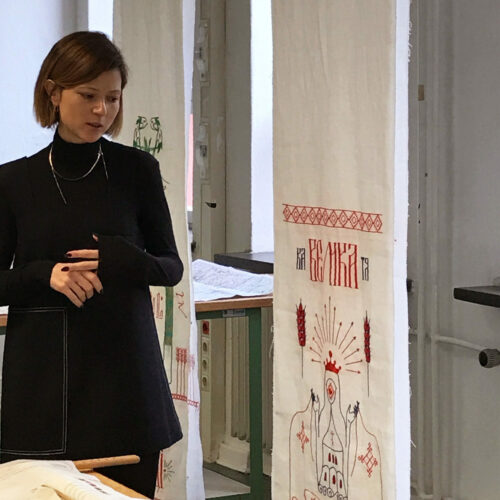