Yael Shavitt is an Israeli born actress and filmmaker based in New York. Yael is the creator, lead actress and editor of the award-winning miniseries SPLIT on Amazon Prime Video. As an actress, she has performed at venues such as the Public Theater, New Ohio Theatre and Dixon Place, and played a lead role in the dark comedy feature “Delenda” (Sarasota Film Festival). Yael also co-created the documentary feature film “If You Pull North” (Jerusalem Jewish Film Festival). She is a founding member of the theater collective Asylos and a graduate of the American Academy of Dramatic Arts (NYC) and the Thelma Yellin School of the Arts (Israel).

From a young age I knew I wanted to be an actress. This was reinforced in me as a student in Thelma Yellin, where I learned all about the art of theater from wonderful teachers who I looked up to. Filmmaking came later for me, out of a need to tell a specific story. Today I see filmmaking, and editing in particular, as an extension of my love for storytelling.

It’s a combination of beautiful projects and experiences, alongside setbacks and sidetracks, which all had an impact on me in their own way and brought me to where I am today. A few highlights include performing the role of Yentl (which I was the understudy for) on stage; forming a theater company with fellow artists-turned-friends and devising multiple whacky pieces with them; and traveling to different cities to attend film festivals with my series SPLIT.

Above all, people and community. Once you’ve found your people: like-minded collaborators that you just click with, you’re halfway there. The next big hurdle is resources. One of my aspirations as a creator is to have resources to make things on a larger scale. I’d like to dream and write bigger, but I’m aware that can make the process of birthing those ideas more challenging.

For the last few years, I’ve been focusing on creating SPLIT: a magical realism miniseries about two possible paths that one life might take. Sort of like Sliding Doors meets Kissing Jessica Stein. We made SPLIT with an all-female team and an all-female or GNC on-set crew. The full series is available on Amazon Prime Video now and it’s very exciting to finally be able to share it with people. I love reading the reviews on Amazon to get a sense of what people take away from watching it.

I love the idea of introducing someone to Israel and Israelis through art and culture. What a perfect way to nudge or topple misconceptions and even prejudices. As an Israeli who’s been living away from Israel for nearly a decade, I find myself drawn more and more to opportunities to explore the Israeli part of me through art. It’s reassuring to know that there’s an organization that’s so devoted to supporting Israeli artists, and young artists in particular. Having those young artists’ backs now is an investment in all of our futures. 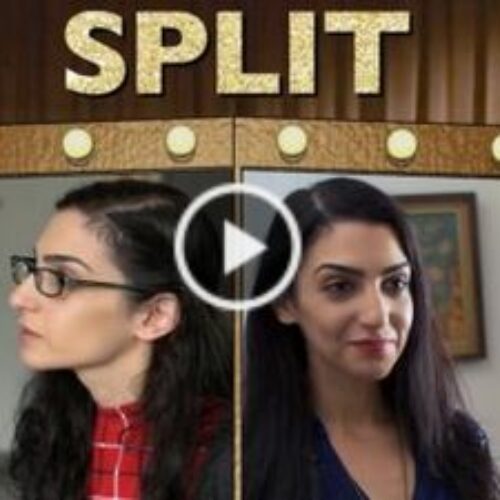