Jazz guitarist and composer Assaf Kehati arrived inthe USA in 2007 and after a short time he has made waves in the jazz scene by working with such names as Ran Blake (piano), George Garzone (sax), Eli Degibri (sax), Ziv Ravitz (drums), Donny McCaslin (sax), Seamus Blake (sax) and legendary drummer Billy Hart (Miles Davis, Wes Montgomery. He has also performed in such venues as the Blue Note, NYC; Regattabar, Boston; Washington DC Jazz Festival; MuzEnergo Jazz Festival, Russia; New England Cable News, MA; Tel Aviv Museum, Israel; and Toronto Jazz Festival.  Kehati has recorded two CDs – A View From My Window (2010) and Flowers and Other Stories (2011). His compositions are inspired by the daily and trivial, yet wonderful, significant experiences of life: from a wintry, snow-laden view of Fenway Park from his apartment porch, to a girl seeking love in a land beyond the oceans.

1) What or who inspired you to want to be an artist?
I started playing piano when I was 10 years old. After one year of studying piano, I saw many rock bands on MTV and I wanted to switch to guitar. I started playing classical guitar, played it for one year, and then switched to electric guitar. At that time (when I was around 12 years old) I was already following some rock guitar idols like Yngwie Malmsteen, Steve Vai, Guns&Roses, Metallica, and more.

I studied music in several places: privately, at my high school’s music department, at Rimon school, and at New England Conservatory in Boston (I got my Master’s there). Other than that, I was, and still am, spending countless of hours at home working on my ideas. On top of that, being able to play my music often for audiences and share the stage with people such as Billy Hart, Victor Lewis, Seamus Blake, Donny MsCaslin, and others, is really inspiring and teaches you a lot.

3) What do you need as an artist today?
I need to do more of what I’m doing: practicing, touring and playing with people that inspire me.

4) What creative project are you working on now?
Right now I’m thinking about recording my 3rd album. I have enough original songs and my arrangements of jazz standards that I like to record and I just need to get some free time and start this project.

5) Where do you see yourself and your career in 10 years?
I see myself living in the USA, where I am located now. There is a very rich and fertile environment for jazz here. I also see myself keeping playing around the world and sharing the love for music with audiences and students.

7) What does it mean to you to have an organization like AICF available in the art world?
To have an organization like AICF is extremely important to have since it is a serious institute that supports Israeli cultural institutions, Israeli artists and encourage excellence. Also, it is very important since it is a great layout for Israeli musicians to connect anywhere in the world with other artists and with audiences. 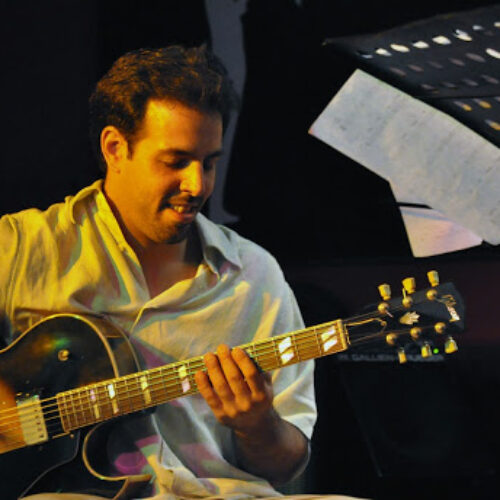