Enjoying wide international recognition, violist Avri Levitan is regarded as one of the most outstanding instrumental soloists in the world. He performs regularly in some of the world’s most prestigious concert halls, such as the Berlin Philharmonic, Vienna Konzerthaus, Tokyo Oji Hall, Casals Hall Tokyo, National Philharmonic Hall Warsaw, Seoul Kumho Art Hall and Art Center, and Stockholm Nybrokajen Hall. Avri’s passion for teaching and creating music comes from the sounds and moments he creates with his music. His compositions have been heralded as a “joy to listen to for music fans” (Variety). Rather than being caught up in the revolution of the Internet, Avri lives a simple musician’s life that keeps his music flowing.

1) What or who inspired you to want to be an artist?
I think that growing up in a very unique and inspiring atmosphere in Israel had an effect on my being a musician. I was exposed to and inspired by artists like Haim Taub, Pnina Salzman, and Leonard Bernstein. I was really lucky to study and listen to that great generation of musicians, who showed us real love and respect to music. Sneaking away during school time to sit and listen to the IPO rehearsing with Bernstein, Celibidache, Barenboim and other great conductors and soloists taught us–the young Israeli generation–the importance of every note and moment in a musical piece.

2) What was your creative journey that has brought you to where you are in your career today?
I think a musician’s journey is the process of learning about oneself day by day. I go step-by-step and find that no step is more important than the other. I couldn’t and wouldn’t change any decision I made or any turn I took. I was born in the middle of Tel Aviv and spent my early years there. They were wonderful years for an Israeli classical musician. I spent years living in a kibbutz, which took me a bit away from the cultural life, but gave me a lot of other qualities. I later had the honor to study with Haim Taub and other great musicians that came to Israel, such as Michael Tree and Ivri Gitlis.

3) What do you need as an artist today?
What we need as artists today is to make our music more personal. I feel that the internet and Facebook revolution have brought some positive things into the world. However, we did lose the independence of thinking, imagining and originality. I think that artists today have to be much more careful and aware of being themselves than before. We are exposed to so many performances and so much information that we forget how to read musical text and make something new.

4) What creative project are you working on now?
I am regularly playing concerts, so it is difficult to speak about a specific project. “Viva Viola”, where I am playing with my students, is a wonderful program. We only do viola group repertoire that I have arranged from other instruments. We have played already in Berlin, Israel, and Spain. Another thing that will come soon to Israel, but already premiered in Europe, is the film K.364 A Journey By Train. For the film, I played with Roi Shiloah, Mozart Concertante and the Amadeus Chamber Orchestra of Polish Radio, under the direction of Agnieszka Duczmal. The film will be shown in the Tel Aviv Museum in December, and we will have a tour with the Israeli Kibbutz Orchestra around the same time. I have many summer festivals ahead of me. In Avila, Spain, I am directing the chamber music program, which invites talented young international musicians. I am also recording a CD for Naxos with the violinist Ju Young Baek this summer as well.

5) Where do you see yourself and your career in 10 years?
Musicians have the advantage, compared to other artists, to experience the moment in its core. We are working with sound, which exists only in the moment. I am trying to enjoy this wonderful gift and not look at myself 10 years from now. I don’t think it is relevant to what I see or think. I wish to learn every day, and to understand how little I know with every year that goes by. 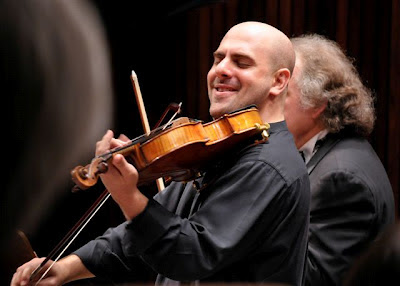 6)  What does it mean to you to be an Israeli artist?
I have a strange answer regarding this question. I hope you all forgive me for that. I am looking forward for the day that this question will cease to exist. I think that this will be the day when we will finally realize that we do have a normal society in Israel. As Israeli artists, we all know this question. I express my personal opinion, but I sometimes envy American or German artists that are being asked about their art or music rather then their country. Music is above countries and religions. Sometimes music can be influenced by them, but in its principle, the idea of music is making correlations with the artists. Nationality is a common mistake. Having said that, I do try to bring out Israeli music and musicians as often as I can (I’ll be playing Partos: Yizkor on July 13 with the Madrid Sinfonietta, for example). I take my students to Kfar Blum Summer Festival with me regularly  to perform and see the nice face of Israel. They will go for the third year in a row this summer. We can definitely do a lot, with the help of art and music, for the Israeli society.

7) What does it mean to you to have an organization like AICF available in the art world?
Like many others, I owe a lot to the AICF for helping me become the musician I am today. It is a great example of how a non-governmental organization serves the Israeli society like no other could. There isn’t anybody officially in Israel that supports musicians like the AICF has been doing throughout these years. I got my first viola loaned from the AICF. It was the thing that gave me the biggest push toward falling in love with this instrument. Support during those years makes a young musician feel a part of a family, which is very important. I am very happy to have been involved as a jury member or a performer with the AICF for many years. 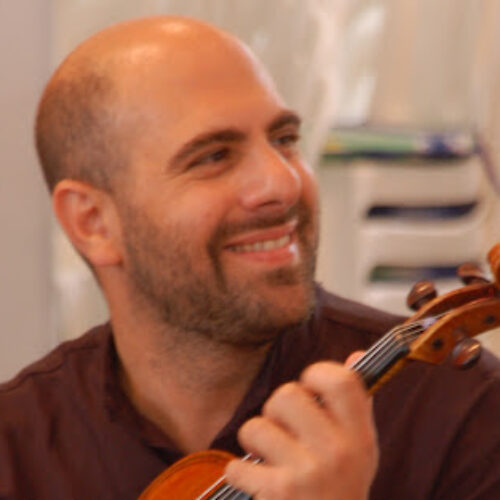