A native of Israel, Daniel Meron succeeds in expressing in his music the diversity of influences from his homeland. Nourished by the tradition of jazz improvisation, but recognizing the value of classical and folklore music, Daniel finds a way to feature his unique playing style in brilliant compositions that are both sophisticated and lyrical, communicating vivid stories and emotions to the listener.

Born in Israel, Daniel began playing the piano at the age of eight, acquiring strong foundations through classical music and then gradually shifting towards the contemporary and jazz genres. As a music student in Ben-Zvi High School, in Kiryat-Ono, Meron’s interest in jazz grew stronger and he began playing in the high school Big Band. Becoming deeply involved in the music department, Daniel began writing band arrangements and composing for theater projects.

After his military discharge in 2006, Meron received a scholarship to attend the Rimon School of Jazz. Majoring in Jazz performance, he studied with musicians like Avi Adrian, Eli Benakot, Amikam Kimelman, and Urai Oron. From 2006-2007 Daniel studied privately with Mr. Opher Brayer and pianist Avi Adrian. He led his own jazz trio that performed in venues such as Tmuna Theater and Shablul Jazz in Tel-Aviv. In September 2007, after receiving a Berklee Scholarship, Daniel began his studies in Berklee College of Music in Boston. He has had the privilege of studying with teachers such as Danilo Perez, Joe Lovano, Ralph Peterson, and Hal Crook.

After graduating from Berklee, Daniel moved to NYC and released his debut album Directions. The album had gained recognition and praise in the reviews of jazz magazines and radio programs around the world, and from leading jazz musicians. Directions features Daniel’s Trio and Quintet with 60 minutes of original music, revealing his distinctive voice both as a composer and an improviser. Currently based in New York, and after playing in numerous venues such as Shapeshifter Lab, Caffe Vivaldi, and The Living Room, Daniel is leading a new group called the Daniel Meron Project, a nine-piece ensemble dedicated to playing Daniel’s new compositions. Combining a jazz quartet with a string quartet and a vocalist, the group produces an exciting mix of jazz, world, and folklore sounds in a very original setting.

1) What or who inspired you to want to be an artist?
I started playing music at a young age with the encouragement of my parents, but did not admit to myself that I really loved and needed it in my life until I was a teenager. As a music major in high school I found myself willingly investing most hours of my day in music, and slowly realizing that I have some talent for it. It was not one specific experience that influenced me, but more a combination of having parents who loved music, great teachers throughout the years, and also feeling the joy and elation when making music with my friends.

2) What was your creative journey that has brought you to where you are in your career today?
When I discovered jazz in high school, I was immediately drawn to the improvisational aspect of it. I felt that this flexible and stimulating form would allow me to find my own unique voice in music. During my army service I was fortunate enough to be appointed chief musical arranger for the military performance troupes. I gained experience arranging for all types of ensembles and collaborated with major artists in the Israeli popular music industry on a regular basis. At the same time I was developing my own musical style and constantly working on new compositions. The need for method and structure in my studies of composition and jazz led me to Rimon School of Jazz and later to Berklee College of Music in Boston. These schools allowed me to perform more than ever, and I toured as both a leader and a sideman during that time. Every chapter in my journey has influenced and shaped me musically and personally. As these experiences affect me, I try to stick to what I feel is true for myself in every musical situation. This is especially challenging in a place like New York, where it can be overwhelming at times, though the reward is that much greater.

3) What do you need as an artist today?
The music business can be quite confusing and is constantly changing. Artists are often left to themselves to figure out how to strategize their career. My greatest needs would be managerial help in booking, promoting, and planning the next steps of my career, and the financial ability to help me execute my visions for different projects.

4) What creative project are you working on now?
My band is playing a show on May 4th in a beautiful space in midtown called the Metropolitan Room. This is the project I’m most proud of since moving to New York. The completion and release of my debut album Directions in 2010 left me satisfied but eager to further refine my music. This current group successfully reflects musically where I am right now. This ensemble performs my most recent compositions including songs as well as bigger movements in the styles of jazz, world, and Israeli folklore. In its full complement, the band consists of nine musicians (with a string quartet and a horn player). The condensed (and more mobile!) version is a quartet of piano, bass, drums, and a vocalist. We’ve had several very successful shows in venues such as The Living Room, Caffe Vivaldi, and Shapeshifter Lab, and hopefully we’ll be recording an album by the end of the year. 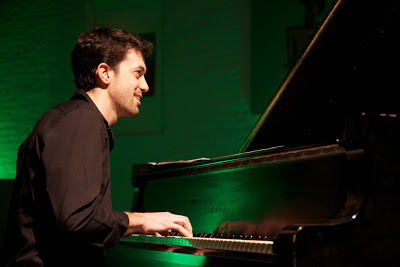 5) Where do you see yourself and your career in 10 years?
Based in Israel, leading my own group in performances around the world, and collaborating with great musicians and artists in projects of all kinds. Composing for theater and film, and teaching music. All the while being able to spend time with, and support a family.

6) What does it mean to you to be an Israeli artist?
To me it means having an unusually diverse and rich culture to draw upon, and to have a natural impulse to question and explore. To be proud of where I come from, and to share everything my heritage has to offer in my communication with people around the world.

7) What does it mean to you to have an organization like AICF available in the art world?
Having an organization that acknowledges and supports the works of artists gives great encouragement to myself and all my friends who are trying to accomplish many wonderful things far from home. It also helps in connecting all of us into one big community of artists, and in reaching out to interested and supportive audiences wherever we perform. 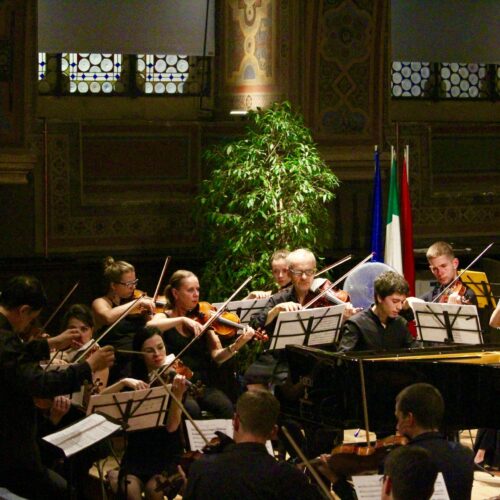