Amikam Kimelman –  saxophonist, arranger and producer. Graduate of the Rubin Academy of Music at Tel Aviv University, and Berklee College of Music. Co-leader of the legendary jazz group Overdraft and leader of The Hard Jazz Knights, and The Human Factory jazz quintets. Amikam has performed in festivals throughout the world, such as South Africa, Kazakhstan, Hungary, Germany and Spain, as well as numerous performances around Israel; he has played with Joanne Brackeen, Lew Soloff, Jeff Berlin, Franck Amsallem, Jean Loup Longnon, Sheila Jordan, Mike del Ferro, Inaki Sandoval, Billy Cobham, Ari Hoenig, and Lou Marini; and has arranged and composed for The Israel Philharmonic Orchestra, The Israel Simfonietta – Beer Sheva, for top Israeli jazz, pop and rock stars such as Rami Kleinstein, Shalom Hanoch, Nurit Galron, Yehoram Gaon and Gidi Gov, as well as for prime time television shows and for major musical events in Israel. Amikam was the general and academic director of Israel’s largest music college – Rimon School of Music in 1990-2014. At present, he directs the school’s external studies program, as well as the music department of Nofei Habesor high school at Eshkol Regional County in the Negev. He has been the musical director of The Tel Aviv Jazz Orchestra since the year 2000, the artistic director of the Israeli label Jazz 972, and the initiator and artistic director of the International Jaffa Jazz Festival.

What or who inspired you to want to be an artist?
I think that the freedom which is built-in, and is structured within music and art, was my main inspiration, even though I was not aware of it at the time. The realization that you don’t have to take into consideration anything or anybody but your own inner voice captivated me. The notion that you can create any kind of music, with any musicians and instruments, in any style, and know that there is no such thing as a “wrong way”, but insufficient skills, makes you improve yourself constantly, and take responsibility for your decisions. It became clear to me when I first listened to John Coltrane’s album Ballads and could visualize, even “touch”, freedom as it was expressed in his sound and playing.

What was your creative journey that has brought you to where you are
in your career today?
There were three factors in my life that led me to where I am today: The urge to learn and absorb as much as possible anything that has to do with music, regardless of genre or style; The understanding that music does not and cannot compromise; Realizing that I must put aside my ego, and understand that it’s not about me, but about the music.

What do you need as an artist today?
More ideas than I already have. I can take care of the rest.

What creative project are you working on now?
I am the musical director of the International Jaffa Jazz Festival, which I founded four years ago. Its agenda is to create jazz encounters between Israeli and foreign jazz musicians and have them make original and unique music together. I am working on new material with my new quartet. I am writing new arrangements for the Tel Aviv Jazz Orchestra, of which I have been the musical director for the past 18 years. I am the head of the elite music program at the Bicurim Music Department of Nofei Habesor high school at the Eshkol regional county near Gaza.

What does it mean to you to have an organization like the AICF
supporting artists and culture?
As I mentioned above, music does not compromise, and it needs the best musicians to enhance and crystalize it in the various aspects which participate in music-making. As long as society at large does not see art as one of the main pillars of life, and do not take upon themselves to invest substantially in creating an environment which enables artists to fully dedicate themselves to art, AICF is an essential entity. 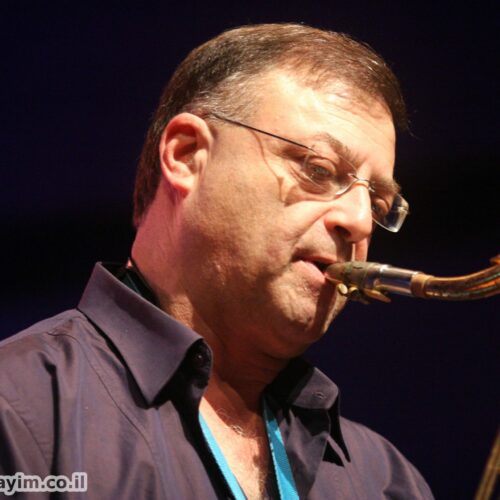