A native of New York City based in Israel, Yoni Avital is an international musician, singer, leader of the music group The Shuk, and a promoter of music, dance, and arts from Israel. As an artist who has performed across Asia, North & South America, the South Pacific, as well as Europe both solo and with The Shuk, Yoni regularly presents some of Israel’s leading artists and performance groups throughout the world. We are more than happy to have Yoni as our Featured Artist of the Week!

1) What or who inspired you to want to be an artist?

Over the years, my mother’s reminisced about how I used to sing to complete strangers as a toddler while sitting on her lap on city buses while growing up in New York City and in Israel. I don’t think that following this path was necessarily a conscious decision, but more so a natural progression in my personal journey.

There have been a number of international musicians and groups who I saw and heard live over the years that have certainly influenced me. But I believe it was through my travels throughout the world over a 3-year period, with my flute and guitar on my back, while meeting people from all walks of life, that I realized a few things: First off, what a wonderful and relatively small global village we live in; One that is much safer and intimate than what all-too-many forces in the media and elsewhere make us believe. A world filled with people who are innately curious about one another and with the use of the simple, ubiquitous and universal medium of music, I learned over time, what we as artists can truly offer this world. And this is exactly what I set out to do when I founded The Shuk back in 2008 and since then, we’ve been using music from our own roots to connect people to one another in over 30 countries around the world, be it in a more formal forum such on stages at festivals and theaters or through lectures and masterclasses that we’ve offered.

I had performed in a number of bands while living in New York as a musician and vocalist . For the past 15 years, I’ve also been a cantor (chazzan) in the U.S. for Rosh Hashanah and Yom Kippur, something that my late grandfather who was a NYC rabbi had encouraged me to do. I had started a Brooklyn-based band together with my cousin back in 2006, focusing our music on Middle Eastern elements. Two years later, I decided to move back to Israel after a significant 20-year hiatus and that’s when I founded The Shuk. The project was to be not only a performance group but rather a group that builds community and offers tangible content to build bridges between all people worldwide.

Since The Shuk was founded in mid 2008, we’ve toured and performed in theaters, festivals, community centers, university campuses, conferences and all types of events around the world. Our premise takes world music from Jewish culture in various languages and themes. We break it down to its core and rearrange and recompose our music to add new life and energy to our eclectic and diverse repertoire. We fuse traditional text with world music, jazz, and ethnic beats, as we did on our newly released music videos of Shalom Aleichem, the Ladino classic Cuando El Rey Nimrod, and the Yemenite hymn for shabbat of D’ror Yikra. At the same time, we aim to make all of our music – despite the fact the most of it is sung in Hebrew – palpable to audiences around the world. For instance, in our new music video of Shalom Aleichem, we’ve given it a subtitle of Peace Be Upon You and despite the fact that the connotation is based around the angels and shabbat, the ubiquitous message and meaning for us is to offer a message of ‘peace’. In the video’s conclusion, the message is translated in French, German, Arabic, Swedish, Hindi, Mandarin and other languages so that all can understand.

Like any other field, I believe one needs to have both a drive and a core belief and confidence in his or her craft.

A music group like ours is comprised not only of truly inspirational and talented musicians, performers and composers, but also a quintet that’s made up of good people who believe in The Shuk’s goal and enjoy the process and the togetherness. We all bring a unique flavor to the stage; each of us with his own respective instrument and more importantly with his special character and energy. Clearly the creation process is a significant part of the pre-production process and the fact that we compose the music both individually and together, allows for each of us to be a valuable part of the team.

Following our release of the music videos of Shalom Aleichem, Cuando El Rey Nimrod, and D’ror Yikra, which have received a great response from our international fan base and from Israeli and international press, we are looking forward to a busy international performance calendar year as well as in Israel.

We seek to bring The Shuk to the entire world and perhaps add more international musicians and dancers of different backgrounds to our international performance to promote further collaboration.

Aside from performing with and leading The Shuk, I also manage a performing arts agency, promoting other performance groups in the fields of music and dance. But all in all, The Shuk is a life project, and I’d like to see us continuing performing for the next few decades around the world, reaching out to new audiences and building new connections. I would love to see us in the future performing in countries and before audiences where we’re currently unable to due to diplomatic and political reasons. I do believe in the power of The Shuk to transcend such barriers.

I personally don’t see nationality as being something that makes an artist more special in that sense of the word. Israel and our region certainly has a very special energy that elicits exceptional innovation, passion and drive and the arts and artists who come from the country certainly have had a positive impact abroad. Any artist coming from a country with such a rich history, diverse population, and eclectic cultural heritage, has an ability to offer a lot. With my work and with The Shuk, I seek to build bridges through the arts; something that is truly my personal driving force both on an individual, humanistic as well as a professional level.

7) What does it mean to you to have an organization like the America-Israel Cultural Foundation supporting Israeli culture in the past 77 years?

The foundation has proved itself as a catalyst for many artists’ development and eventual success as professionals. As it supports young artists’ education, it provides the foundation for self-discovery. Without AICF, all-too-many ‘would be’ artists, would likely be doing something else with their lives. 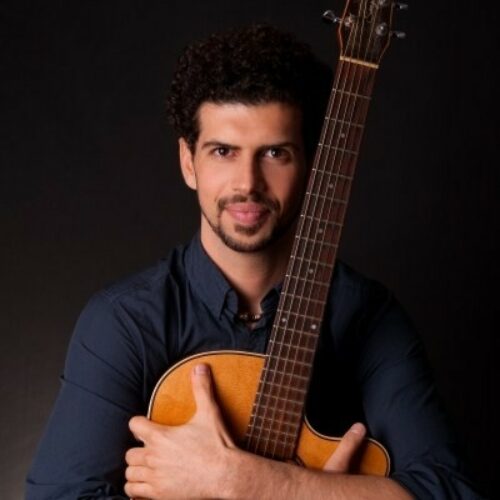