Ghiora Aharoni in the Jerusalem Biennale

GER/The Stranger examines the duality created by the identification of “the other,”
exploring this complex, symbiotic relationship and the potential for intercultural
compassion, as exemplified by the life of Maimonides (Rambam), the seminal medieval
Jewish philosopher, scholar and physician. Sacred text engraved on the sculpture’s
glass beakers in Hebrabic/Arabrew©—an overlay of Hebrew and Arabic created by
Aharoni, a Jew of Yemeni descent, in 2010—form a metaphorical parallel to
Maimonides: a contemporary exploration of traversing the cultural chasm of otherness.

In an era of shifting social ideologies, GER/The Stranger invites us to consider the
dynamic of otherness—an inherent state of humanity that transcends time, cultures and
geography—in relation to ourselves as well as our perception of those who are, in some
respect, different from us—be it race, sexual orientation, religion, nationality or gender
identity.

Aharoni founded his multi-disciplinary studio for art and design in New York City
in 2004. His artworks are characterized by an interest in exploring dualities, such as the
intersection of religion and science, and the intertwined relationships of seemingly
disparate cultures. Much of his work involves text, traditional objects or symbols—such
as cultural artifacts or sacred texts—that have been re-contextualized and imbued with meaning that asks the viewer to question or reconsider their conventional social/cultural significance.

GER/The Stranger will be exhibited at the Bezeq Building, 12 Chopin Street. The Jerusalem Biennale will take place from October 8 to November 15. 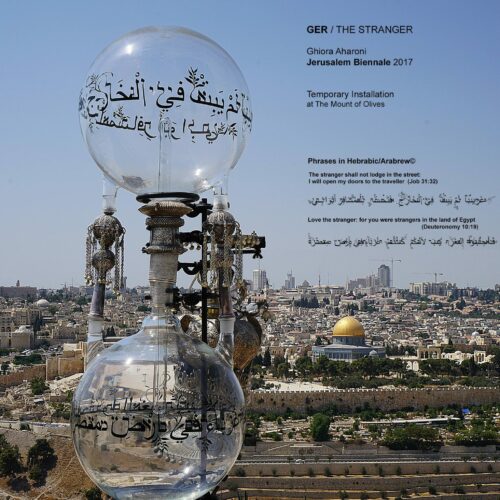