Integrated Dance Gives Those With Disabilities An Equal Opportunity

When Hai Cohen, 45, and a quadriplegic for the last 31 years, first experienced integrated dance, he was astonished to find an experience that could touch his complex, wheelchair-bound body.

“It’s work that meets the body with all its complications,” said Cohen. “It touches the body.”
The inclusive method of movement and contact was developed by English dancer Adam Benjamin. It aims to create a safe and open space for people to have personal, physical and artistic breakthroughs, regardless of whether its practitioners have any physical disabilities.

Cohen’s first interaction with the integrative dance movement was 18 years ago. By chance, Cohen, a filmmaker at the time, took part in a workshop led by Benjamin, the English dancer. And that very first experience of integrated dance deeply touched him, a quadriplegic from the age of 14 when he was hurt diving into a shallow pool.

“It surprised me a lot. I never planned to go in this direction, and it was surprising in its strength to affect me”, he said. “I was in a kind of great happiness, a kind of excitement. The key was that it was work that met my body with all its complications; it touched my body”.

Cohen met Tali Wertheim back then; Wertheim is a classically trained dancer and one of the four Wertheim sisters behind the Vertigo modern dance troupe. She had first experienced integrated dance around the same time Cohen had, and it had changed everything for her in dance, pushing inclusion to the front and center of her consciousness. “Inclusion really became something very front and center for me, it was a big change,” said Wertheim.

The two then created “Duet”, their dual performance that was performed for three years in Israel and abroad, a success they had not expected. Since that time, they have performed their dance, “Duet”, many times, and created their own Israeli version of integrated dance, known as Vertigo’s Power of Balance dance program, now a regular part of the dance troupe’s repertoire. The training program focuses on the artistic elements of contact (touch), improvisation, and choreography (connection and movement), for both the wheelchair-bound and those who are not.

The program — which offers professional training for dancers and teachers who want to develop skills in the field of contact improvisation and integrated dance — is an intensive course in the spontaneous dance art, in which dancers of various physical abilities use touch, direction, gravity, and momentum to create a çowing movement. The result is powerful and moving.

“It was personal”, said Wertheim of integrated dance, “touch a lot and it had a strength I didn’t know could exist”. She remembers working with someone in a wheelchair operated with a joystick, who, through integrated dance, ended up moving her hand in a way she had not thought she could. “She cried, saying no one had ever touched her that way”, said Wertheim. “This was an adult, an activist, someone who was very present in her world, but whose body hadn’t been touched like that. It showed me that this was my next thing”.

“We knew that it wouldn’t end with just one show”, said Wertheim. “We wanted to continue it here in Israel, and we didn’t have a lot of information so we just researched it. There’s the Israeli çavor in it and it looks and feels different. Your own culture affects it, because it’s a dialogue between cultures”.

They still perform “Duet”, a 10-minute dance that “lives,” said Cohen, “and has also changed with the years”. The pair are now ratcheting up their work in training, aiming to bring the Power of Balance program into more schools, community centers, old age homes, and other welcoming spaces, by training additional teachers. “We want to go as deep as we can with this”, said Wertheim, “But we also need more people in order to reach everyone. We need more teachers”.

They work with schools that already have dance programs and focus much of their attention on the program for training dance teachers at Vertigo’s Eco-Art Village. That’s the Ela Valley center at Kibbutz Halamed Hei where the Vertigo troupe trains, and where all kinds of visitors, from Birthright buses and Federation missions, to local and foreign tourists can come for a morning, afternoon, or several days of life at this ecological, dance-filled space.

“This has allowed us to expose our work to the world”, said Wertheim. “They give us some of their hours, and often it’s the highlight of their time here”. With a small group of people now trained in integrated dance, the pair are about to meet with the Education Ministry,
which is interested in including the Power of Balance program as a project in new schools that will be constructed for the purpose of inclusion, with physical and psychological plans that will offer a new model of education.

“They see us as a model, because there’s nothing else like it”, said Wertheim. “They want this in their new schools”.

“Our method is based on what people can give, not their abilities”, she said. “We can specify and improve, and change things, and when you learn that, deeply, you can copy it to everything you do in your life, at home, when someone is honking you in your car. It has a deeper message”.

Vertigo’s Power of Balance is offering a new workshop for dance teachers from August 19-23 at the Eco-Art Village, with training in English. More information is available on the Vertigo website.

Originally published in The Times of Israel, written by Jessica Steinberg 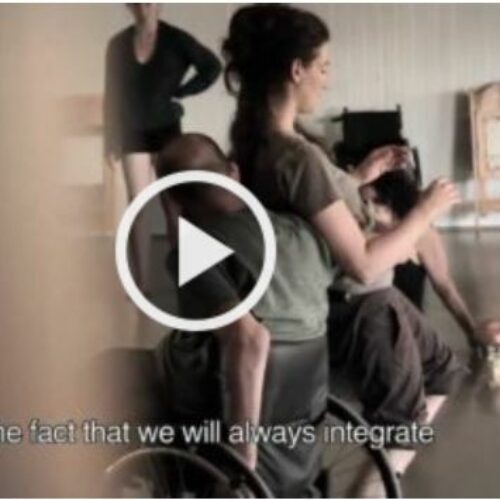